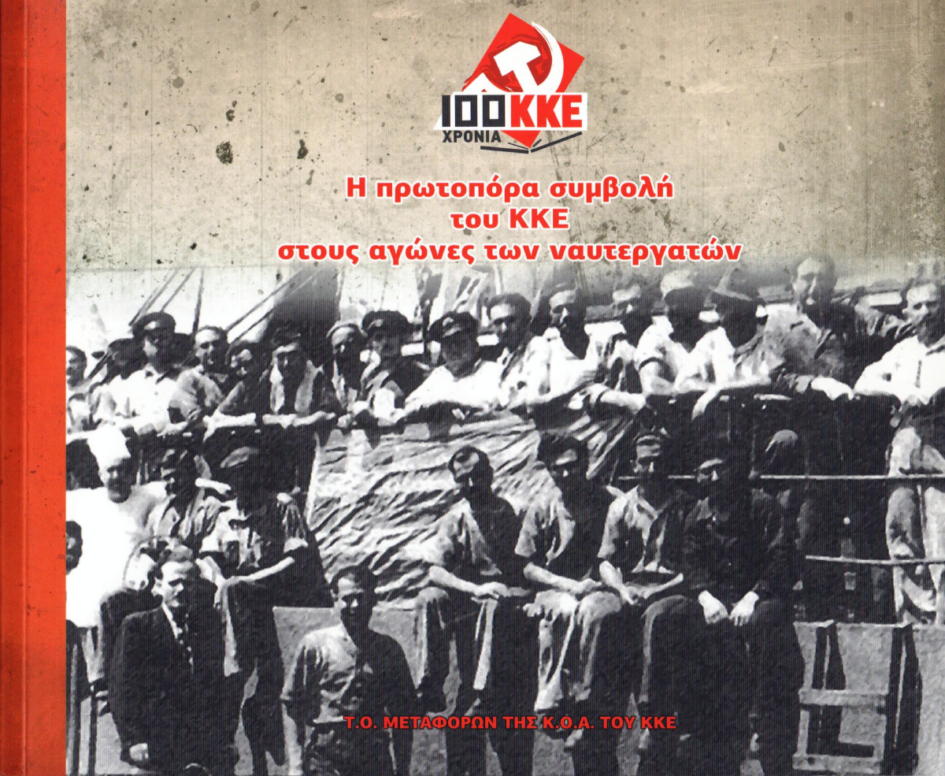 Founded 4 November 1918, the Communist Party of Greece (KKE—Kommounistikó Kómma Elládas) published a book in 2018 as part of the commemoration of its 100 years of history 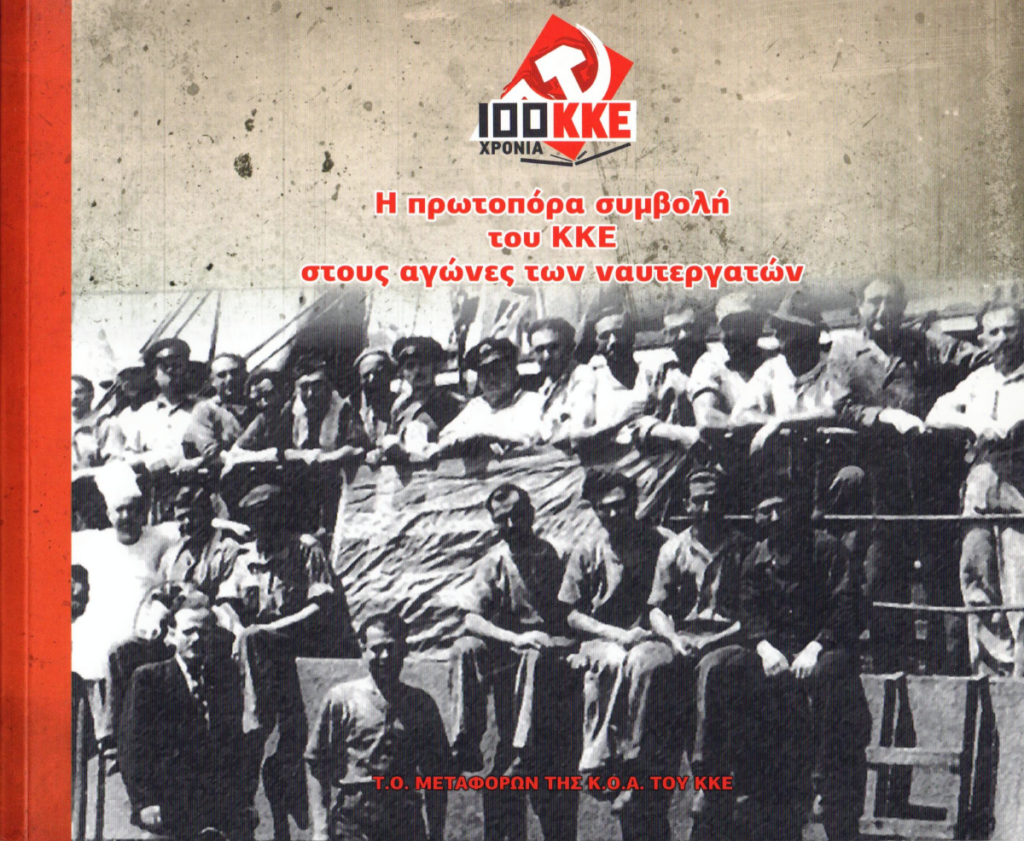 The book: ”Η πρωτοπόρα συμβολή του ΚΚΕ στους αγώνες των ναυτεργατών” (‘The Vanguard Role of the Communist Party of Greece in the Struggles of the Greek Seamen’) was published by the transport section of the Athens district of the KKE

The struggle against fascism in Spain not only received broad support from the outside world in the form of solidarity rallies and donations, it was also waged directly and militantly—including at sea. We have covered the Soviet and British blockade runners on this website and are now pleased to add the story of the heroic struggle of the Greek sailors.

We truly appreciate the great solidarity and support of the Ernst Thälmann Memorial in Hamburg by the Greek comrades of the KKE. As a result of their help and translation, we have been able to publish this text in German and, now, in English.

Introduction to the book

This book is dedicated to the struggles of the Communist Party of Greece, KKE, over the past hundred years. It reflects on the most important stages of the seafarers’ labour movement and thus the leading role of the KKE seafarers’ organisation—the class-conscious workers’ movement—in the constant, hard struggle against the exploitative system of the shipowners, the bourgeois state and its government.

From the very beginning of the Spanish Civil War, the Greek shipowners made huge profits trading with Franco fascists. In fact, the profits were so colossal that the loss of ships or human lives was considered acceptable. 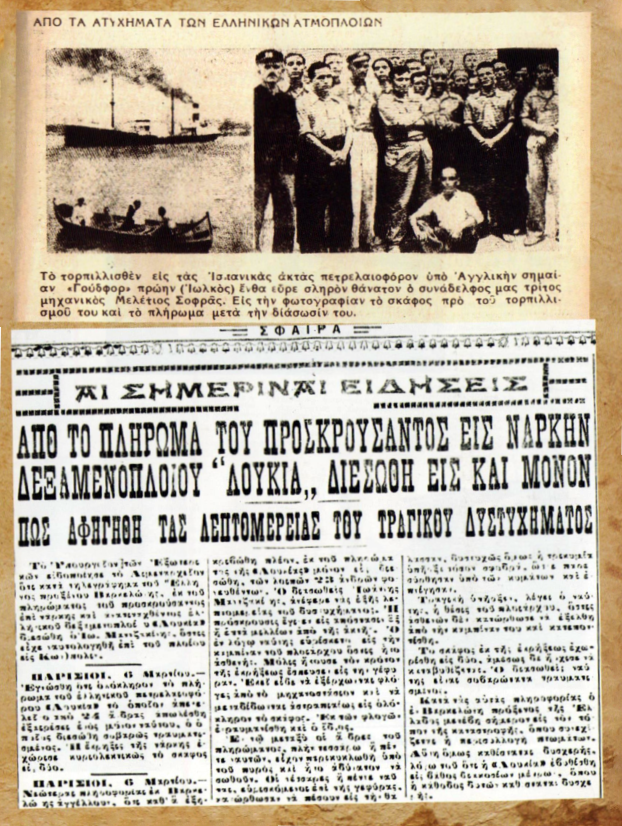 Captions and photo descriptions (newspaper clipping, top): ‘Tanker Goodfor (ex Iolkos) flying British flag torpedoed off the Spanish coast killing colleague, third engineer, Meletios Sofras’. The photo to the left shows the ship before the torpedoing and the photo to the right, the crew after the rescue.

(Newspaper clipping, bottom): From the newspaper Sfaira (Sphere), section ‘News of today’, headline: ‘From tanker Loukia, blown up by mine. Only one crew member rescued’.

One outstanding action of the seamen of this period was the refusal of the crew of the tanker Vassos to transport a cargo to Spain in 1937. The communist Kostas Stefanatos was one of the leaders of this resistance operation. The crew was taken into custody and subsequently sent to Piraeus for interrogation. The examining magistrate report states: ‘To carry out their plan of handing over the cargo to the anti-Franco side, they formed soviets [i.e. councils] on the ship.’ (Stefanatos, K, Seamen, Sychroni Epochi, Athens 1981, p. 81). 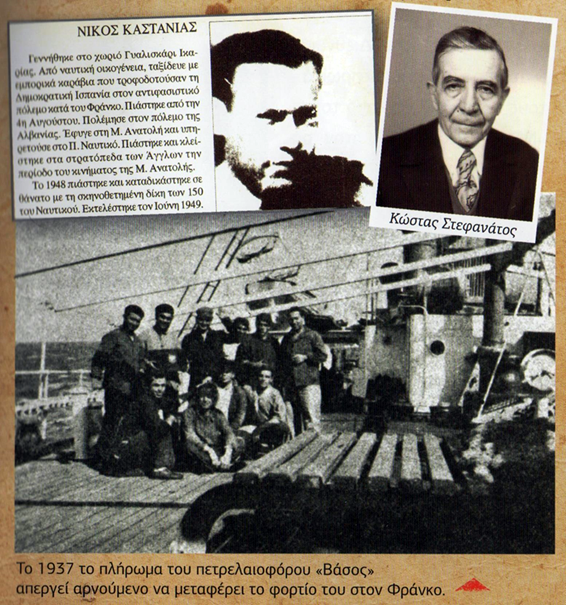 Text (top left): ‘Coming from a family of sailors, Nikos Kastanias was born in the fishing village Gialaskari on the island of Ikaria. [During the Spanish Civil War], he was a merchant seaman on ships delivering supplies to democratic Spain in the anti-fascist struggle against Franco. [After the fascist Greek dictator Ioannis Metaxas seized power—also known as the] ‘Regime of the Fourth of August’—Nikos Kastanias was arrested. In the Second World War, he fought on the Albanian Front and later fled to the Middle East where he served in the Navy. He was interned by the British during the anti-fascist movement in the Middle East. In Greece, 1948, Nikos Kastanias was arrested [for alleged subversive activities] and in the staged trial of the ‘150 of the Navy’ he received the death sentence and was executed June 1949’.

(Caption, bottom): ‘In 1937, the crew of tanker Vassos went on strike refusing to deliver cargo to Franco’.

The action of the Greek sailors of the steamship Kimon, transporting ammunition to Spain, is another courageous example. When the ship moored in the port of Souda (Crete), the crew abandoned ship. The Chania [second largest city in Crete] KKE branch then recruited a new crew and organised the transport of the valuable cargo to democratic Spain. 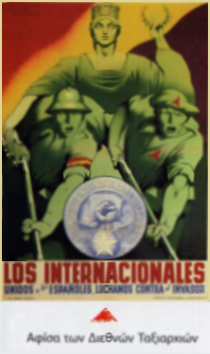 In August 1937, the Central Committee of the KKE called on the Greek people to ‘support with all means the brave, heroic struggle of the Spanish Republic’. Heroic was the participation of many communist Greek sailors in the Spanish Civil War against fascist Franco.

Large was the number of communist sailors who fought alongside the Spanish people in the ranks of the International Brigades. The highly difficult and dangerous mission to smuggle the brigadists into Spain was mainly carried by the headquarters of the NEE [Union of Greek Seamen] via Marseille. 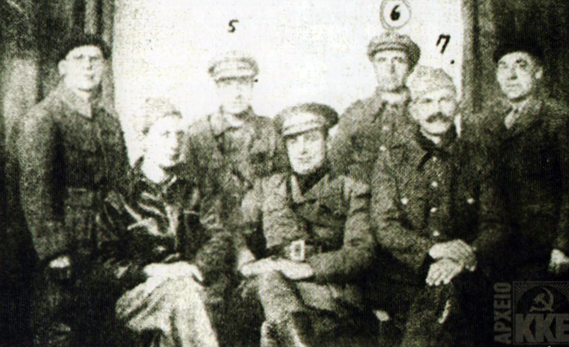 Greek fighters of the International Brigades, among them Nikos Karagiannis [Karayiannis] [1] 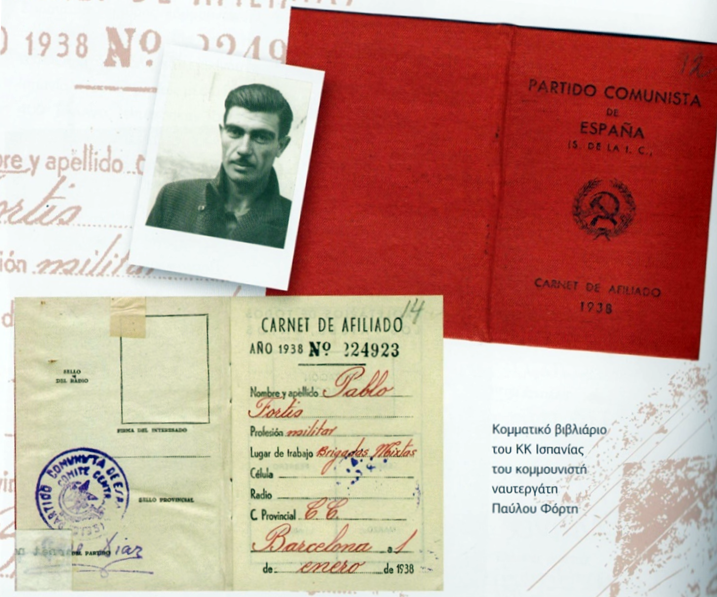 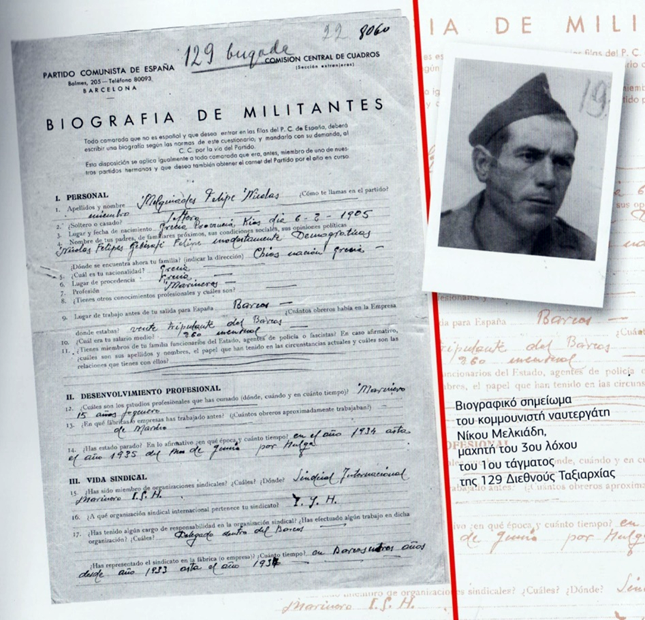 In mid-1937, at the founding meeting of the Greek Brigade, the Nikos Zachariadis Brigade, a third of the brigadists were sailors. Communist sailor, Nikos Karagiannis, was one of the commanders. 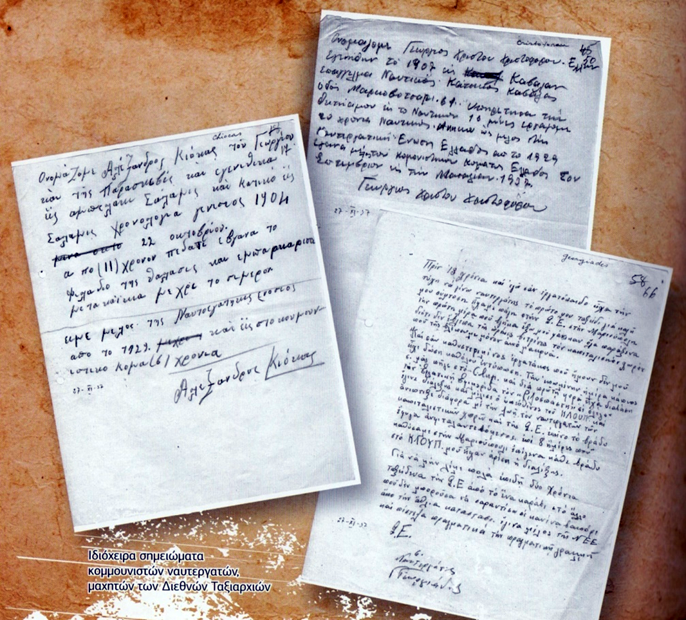 Notes on communist seamen—fighters in the International Brigades 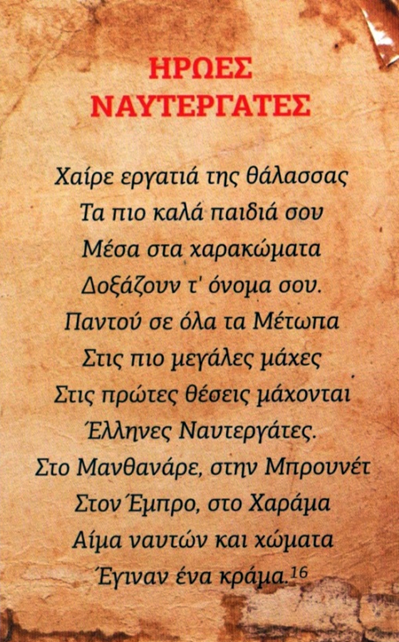 Heroes ode to the Greek seamen (in Greek) 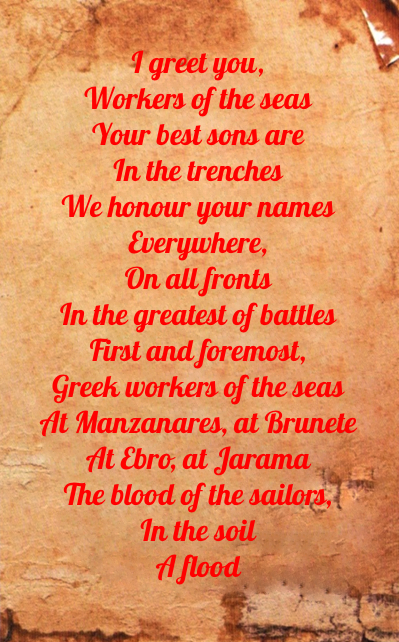 Heroes ode to the Greek seamen

The Hellenic Seamen’s Association (NEE) did everything it could to support the crews of those ships that broke the blockade against Republican Spain and brought ammunition to its defenders.

Then chairman of the NEE, Ath. Kampouroglou was executed by the Germans in France. After the surrender of France in the summer of 1940, the headquarters of the NEE were moved to New York.

These seafarers’ struggle for the interests of the ‘workers of the seas’, for the rights of the working class, for a socialist-communist society and against the exploitation of man by man, was fought under very difficult circumstances.

The initial foundation of trade unions and organisation of the seafarers in Greece started in the early twentieth century. There were constant confrontations between the class-conscious labour movement and the forces of reformism; the pro-government, pro-employer trade unionism that was, and still is, completely on the side of shipowners’ capital.

The history of the Greek seafarers [is flooded with heroic efforts, fights and losses. In the following, we shall mention a few.]

The seamen’s [wholehearted] support of the command network of shipboard committees.

The heroic work of the Federation of Greek Maritime Unions (OENO) (Ομοσπονδίας Ελληνικών Ναυτεργατικών Οργανώσεω) played a special role in the struggle against the fascist monster during World War 2.

[During the early years of the Greek Civil War (1943-1949)] many seamen went to the mountains to fight the fascists in the ranks of the Greek Democratic Army (DSE).

[In the later years of the Greek Civil War] the struggle continued unabated. The Unified Anti-Dictatorial Syndicalist Movement of Greek Seamen (EASKEN) was founded against the military dictatorship of 1967-1974 [the Junta].

The formation of the Trade Union Movement of Maritime Workers (NSK) and the leading role of the two unions PEMEN [crew] and Stephenson (engine room)—the class-conscious workers’ movements—in the ranks of the [All-Workers Militant Front] (PAME) are also worth mentioning. Strikes and struggles against the repressive apparatus were [and are] numerous.

Among the many unbowed of the class struggle was the communist Captain [Dimitris] Tatakis, who was tortured to death in Makronissos concentration camp.

[Thousands] of communist seamen have been persecuted for years [on end]; forced into unemployment due to blacklisting, spent countless years in prison and exile, and gave their lives. Yet, they remained loyal to the party and the labour movement until their [very] last breath.

To them belong A. [Antonis] Ambatielos, N. Kaloudis, S. Tsampis, N. Karagiannis, B. Bekakos, D. Koliarakis, N. Orfanos and other militants in the OENO trial.

Having learned from the history of the 100-year struggle of the Communist Party of Greece and with the frontline courage of the men of their day, young communist seamen continue their daily struggle for the seafarers and the ultimate goal; to write of a new chapter in history in which the ships become the property of society, meeting the needs of the people instead of the shipowners’ pursuit of profit and the interest of capital. 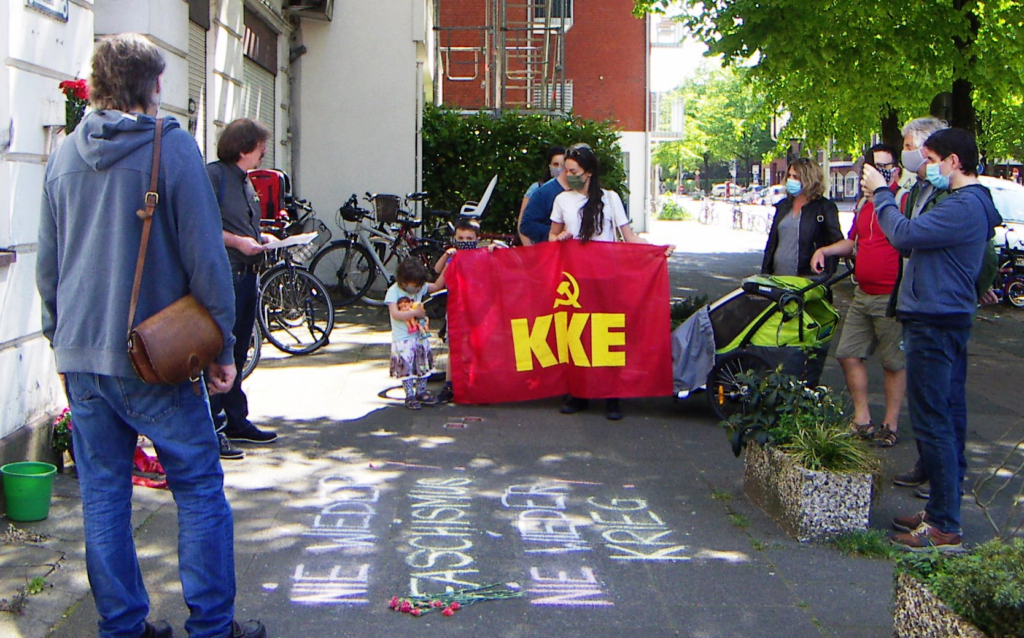 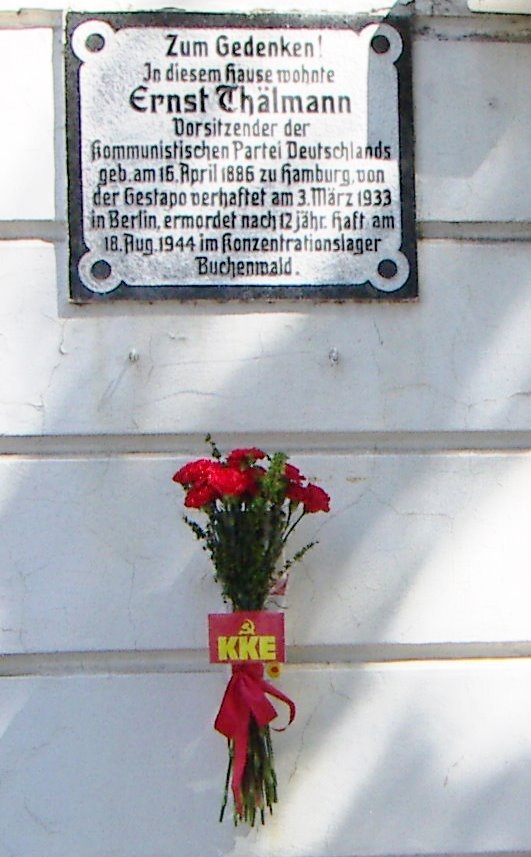 [1] ‘Appeal on behalf of the imprisoned Greek veteran Nicos Karayiannis, who had been held in a camp in Sudan.‘, Modern Records Centre, University Library, University of Warwick

[2] According to the article The Greek antifascist volunteers in the Spanish Civil War ‘The number of Greek volunteers cannot be determined with certainty, as the conditions prevailing in the country did not allow proper registration. Approximately, P. Aivazis (see “Avgi” 10/12/75) estimates them at 300. John Kampitis (volunteer) claims they were 290. The historian Karanikolas (“Radical 5.10.75) estimates 400. The same number gives the Cypriot newspaper “Haravgi” (see 11.2.75). The vast majority of the Greek volunteers were labourers, and almost half of them sailors. Politically, most of the Greek volunteers belonged to the Communist Party, and there was a group of Greek anarchists who acted basically in the area of Barcelona, where the Spanish anarchists gathered most of their power. It was never known whether among the Greeks there were women volunteers either as fighters or other auxiliary services, like women from other countries’.