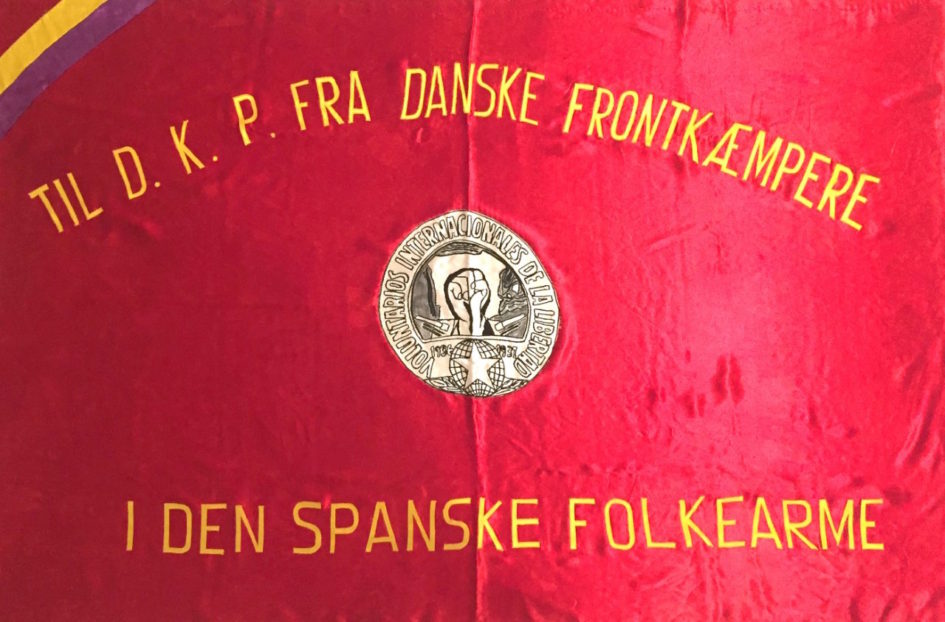 The association Friends of the International Brigades, Spain 1936-39 wishes everyone a peaceful and successful 2019

A story about a journey
– After a 73 year long journey, a flag is returning home 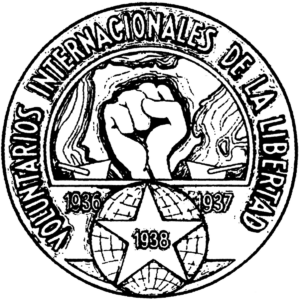 By Allan Christiansen, Chairman of the organisation Friends of the International Brigade, Spain 1936-1939

On the 18th of July 1936, right wing and fascist officers – under the command of generals such as Franco – let a revolt against the democratically elected Popular Front government. A revolt supported by the big landowners, the industrial capital and, not least, the Catholic Church.

The Spanish people took up arms against the fascist coup and thus the civil war was a reality.

Only six weeks after Spain was plunged into civil war, fours Danes – the three brothers Åge, Kai and Harald Nielsen and Hans Petersen – arrived to Barcelona, after a long and arduous journey on bikes through Europe, where they were enrolled in Centurion Thälmann.

A total of between 500 and 550 Danes fought in the civil war alongside the Republicans. Most volunteers from Denmark sailed from Esbjerg on the steamer A.P. Bernsdorff to Belgian or French ports. From here, they travelled via Paris to Perpignan and then on foot across the Pyrenees to Figueres or by ship from Marseille to Barcelona. Besides these routes, many mariners dismounted when their ships docked Spanish ports and joined the International Brigades.

There were Danes in all five brigades and higher staffs, but the majority of the Danish volunteers were enrolled in the Scandinavian company in the Xl. International Brigade’s 3rd Battalion, Ernst Thälmann.

A flag is born

In the spring of 1937, these were the Danes who initiated the collection of funds for a flag inscribed “To D.K.P. from the Danish front fighters in the Spanish People’s Army”.

The flag was conveyed by courier to the Danish Communist Party (DKP). It was partly to serve as a greeting from the volunteers to the comrades at home and partly as a reminder that the Republic still needed international solidarity.

For many years, the flag hung at the first floor of DKP’s party house in Absalonsgade in Odense. How it ended up here is lost in the mists. Maybe it was soldered away to DKP on Funen following the clean-up of the party house in Dronningens Tværgade in Copenhagen in the 1950s or 1960s.

After many years of ‘smoke and steam’ the flag faded and seams broke. A woman who was employed at the party office embroidered it up once, but around 1987, it was so faded that it was put in the attic.

It was not allowed to disintegrate in this manner, though. A smaller committee was established to restore and re-hang the flag. When the committee turned to the textile conservation of Odense Museum, the conservators believed that it would be better to leave the flag as it was reasoning that “It has hung proudly conjuring the young at party meetings even while it was fading”, and they were right about that.

Instead, the committee agreed to get a copy of the original in ¾ size and hang it in the room among the photo boards of Lenin and Martin Andersen-Nexø. But the journey of the old flag did not end there. In 1996, one of the founders of the committee contacted the ‘The Association of Danish Spain Volunteers and Friends of the I.B’ and handed over the flag to the chairman with the following words: “The flag comes from Spain and now it’s about time that it returns to Spain”.

The flag should also remind us that more than 200 Danes are buried in Spanish soil – no one knows where! But from their blood and the blood of many others, the flowers of freedom shall one day sprout from Spain’s soil.

Since then, the flag has been to Spain many times and represented the Danish volunteers at different events. This spring, it is 14 years since the association was handed over the flag and 73 years since it began its long journey. The flag’s long and eventful journey has ended and it has returned to Spain, probably forever. 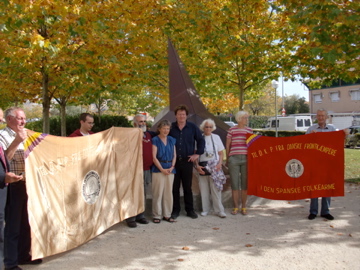 The 28th of October 2009, the flag was officially handed over to representatives of the Spanish Association in the city of Rivas Vaciamadrid. Rivas Vaciamadrid is situated 14 km south-east of Madrid and here, plans have been made to build a museum dedicated to the fights for the defense of Madrid and here, the flag will finally get the home it deserves.

We hope and belief that it will tell the story of the Danes who left for Spain to fight shoulder by shoulder with the Spanish people for a free and democratic Spain.

The flag should also remind us that more than 200 Danes are buried in Spanish soil – no one knows where! But from their blood and the blood of many others, the flowers of freedom shall one day sprout from Spain’s soil.

Translation from Danish by Maria Busch