Seven Danes and the Torpedoing of the Ciudad de Barcelona 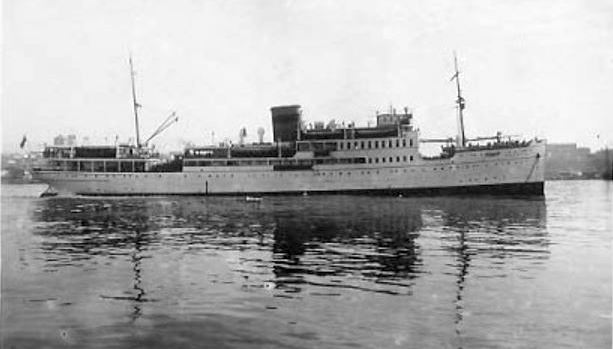 The steamship Ciudad de Barcelona, built in the Cantieri Naval Triestino shipyard at Montefalcone, was launched on 8 June 1929 as Infante Don Jaime. After the declaration of the Second Republic on 14 April 1931, it was renamed the Ciudad de Barcelona. With a displacement of 5,200 tonnes and a top speed of 17.7 knots, the ship could carry 264 passengers, a crew of 62 and nine lifeboats.

Following the Nationalist attack on the Second Republic early July 1936, the Ciudad de Barcelona landed troops and material at Mallorca and Ibiza in the failed attempt to counter the invasion of Franco’s troops. The ship then made voyages to Mediterranean ports and Soviet Union ports in the Black Sea, transporting weapons, ammunition and food to the Republic as well as the International Brigades volunteers from the Mediterranean coast to Spain. 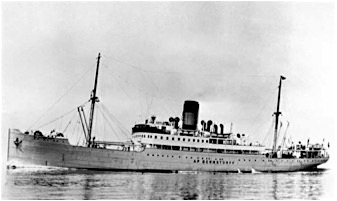 The International Brigades volunteers, including the Danes, did, however, follow different routes to Spain, where Copenhagen became a nodal point. It is estimated that over 2000 volunteers passed through Copenhagen; Norwegians, Swedes, Finnes and people from East-European countries. Some groups travelled by train from Copenhagen across Antwerpen and Brussels to Paris, others took the more common route Copenhagen-Esbjerg then boarding the SS A.P. Bernstorff for Antwerpen, Dunkerque or Le Havre.

Still others came up with autonomous initiatives as, for instance, the three Nielsen brothers and Hans Petersen who went by bike all the way through Germany to get to Paris, or sailors who disembarked and joined the International Brigades directly.

Once in Paris, the volunteers should register at 9, Place du Combat or 8, Rue de Mathurin-Moreau, where they underwent a short medical and conscription examination before they set off in groups from Gare d’Austerlitz heading south to Barcelona.

On 26 February 1937, the Non-Intervention Committee banned volunteers from entering Spain to fight in the civil war, and the passage “Not valid for Spain or Spanish territories” was now entered into all passports. Reroutings from Paris had to be established; the volunteers were transported to Perpignan or Carcassonne and then by busses to the Pyrenees. To get to Figueres, they had to embark on the dangerous journey of crossing the mountains on foot. Other groups sailed from Marseille to Barcelona or Valencia. 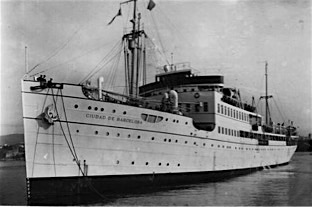 SS Ciudad de Barcelona in the harbour of Barcelona

By the end of May 1937, several groups of volunteers were gathered in Marseille, waiting to be transported by ship to Barcelona. On the night of 29 May, between 250 and 300 volunteers embarked the Ciudad de Barcelona and the next morning, the ship raised anchor and sailed toward its destination. The ship was closely followed by two seaplanes and an armed trawler, and entering Spanish waters, Ciudad de Barcelona sailed in near-shore waters alongside the Spanish coast to avoid the Italian submarines.

The torpedoing of the Ciudad de Barcelona

On 30 May, 2:50 pm, the Ciudad de Barcelona was torpedoed amidships off the coast of Malgrat de Mar, slightly north of Barcelona. Ten minutes later, the ship went down. The lifeboats were launched and soon filled, and the rest of the passengers had to jump into the water. Those resting in their cabins didn’t make it up on deck, and their fate was sealed. 65 volunteers died, including three three out of seven Danes.

BIOGRAPHY OF SEVEN DANES ONBOARD THE CIUDAD DE BARCELONE 30. MAY 1937

Ivar Lassen Andersen was born 1 September 1907 in the parish of Sønder Bøel, Esbjerg, Jutland, son to farmer Christian Andersen and wife Marie Lassen. Ivar became a dairy farmer and in 1926 he emigrated to Edmonton, Canada and later moved to Vancouver. He was a member of the Communist Party of Canada.

Ivar left Canada for Spain in May 1937. Following the mandatory stopover in Paris, he travelled with a larger group of Canadian volunteers to Marseille. A couple of days later, Ivar boarded the steamship Ciudad de Barcelona as various groups of volunteers set off for Barcelona. Being a fine swimmer, he saved the life of several of the other passengers when the ship was torpedoed.

Getting to shore, Ivar and the other survivors were treated for any injuries before being sent to Albacete, where he was enrolled in the 35. Division, XV. International Brigade, the Canadian Battalion dubbed the ‘Mac-Paps’ (The Mackenzie–Papineau Battalion). 10. August 1938, Ivar was severely wounded when hit directly by a mortar shell that ripped open both his legs. He asked his comrades to say goodbye to his best friend. Sensing his intention, they tried to talk him out of it. “When we get back home from here, there’s no pension, no nothing.” Those were his last words before he took his rifle and shot himself. He was 31 years old.

Helmuth Peter Blaabjerg Christensen was born 7 February 1910 in Svendborg, Funen. An unmarried worker, he moved to the working-class area of Bjelkes Allé in Copenhagen. Helmuth was a member of the antifascist demonstration safeguard group Arbejderværnet.

He left for Spain in May 1937, traveling from Copenhagen to Esbjerg and then by the MS A.P. Bernstorff to Antwerpen and on to Paris. Once in Paris, Helmuth underwent a short conscription examination and then waited for a larger group of volunteers to be gathered before heading for Marseilles by train from Gare Austerlitz. 29 May 1937, he boarded the steamship Ciudad de Barcelona and left for Barcelona.

Helmuth managed to save himself when the ship was torpedoed and after a short stop in Malgrat, he was sent to Albacete via Barcelona where he was enrolled in the 17. Division, XI. International Brigade—assigned to the auto park as chauffeur. 13 October 1937, Helmuth was transferred to the infantry of the Hans Beimler Battalion, which was assigned to the 35. Division, 5 July 1937. Helmuth took part in the Battle of Belchite of August/September 1937. He probably contracted the typhoid while his Battalion was stationed in Grañén as reserve troops. Helmuth Peter Blaabjerg Christensen was buried in Barcelona where he died of typhoid at Hospital no. 14, 14. November 1937. He was 27 years old.

Henry Højbjerg was born on 28 July 1918 in Copenhagen. He was a steamship stoker and a member of the Social Democratic Youth of Denmark (DSU) in Gentofte. Henry left for Spain in May 1937, following the same route as Helmuth Christensen—as, with the exception of Ivar Lassen Andersen, they all did. In Albacete, he was enrolled in the 17. Division, XI. International Brigade, 3. Battalion Ernst Thälmann. He was killed in the Battle of Brunete, 18 July 1937. Henry Højbjerg was 19 years old.

Ferdinand Joseph Koch was born on 2 February 1914 in Frederiksberg, Copenhagen. He was unmarried and a member of the Communist Youth of Denmark (DKU).

He left for Spain in May 1937. Ferdinand survived the torpedoing of Ciudad de Barcelona being rescued into a lifeboat and sailed ashore.

Once in Albacete, he was enrolled in the 17. Division, XI. International Brigade, assigned to the auto park as ambulance driver in Grupo Evacuscion no. 1 for approximately one year.

Ferdinand was to be discharged in July 1938, but volunteered during the campaign before the Ebro Offensive and was enrolled in the 2. Battalion Hans Beimler as an infantryman in the 2. Army Corps Martin Andersen-Nexø. At Ascó, 26. July 1938, on the second day after the crossing of the Ebro, Ferdinand Joseph Koch was killed by machine-gun bullets in his neck. He was 25 years old.

Børge Villy Petersen was born on 28 July 1909. He was a member of the Social Democratic Youth of Denmark (DSU) in Frederiksberg.

Kaj Harry Rasmussen was born 23 June 1917 in Kjøbelev on the island of Lolland, the son to farm hand Anton Rasmussen (Bjærsgården 1, 7100 Vejle, Jutland). When Kaj was one-year-old, his father was moved to Jutland by his union to organise the farm hands. In 1937, the family moved to Horsens, Jutland, where Kaj later became a factory worker, a member of the Communist Youth of Denmark (DKU) and actively participated in union activities; he became a member of the governing board of the Joint Union Management of Apprentices and Young Workers and, for a period, secretary of the Joint Committee of the Unemployed. When Kaj turned 18, he became a very active member of the Wood Workers’ Union. His last known address was in Horsens.

Kaj left for Spain in May 1937 and drowned when Ciudad de Barcelona was torpedoed. He was barely 20 years old.

Ejnar Christian Marius Vigø was born on 30 December 1908, son to Hansigne Vigø (Toldbogade 15 A, 1253 Copenhagen). Ejnar was an unmarried worker, a member of the antifascist demonstration safeguard group Arbejderværnet, and his last known address was Tranevej 1, 3. floor to the left, North-West area of Copenhagen.

Ejnar left for Spain May 1937 and drowned when the SS Ciudad de Barcelona was torpedoed by an Italian submarine, 30. May 1937. Ejnar Christian Marius Vigø was 28 years old.