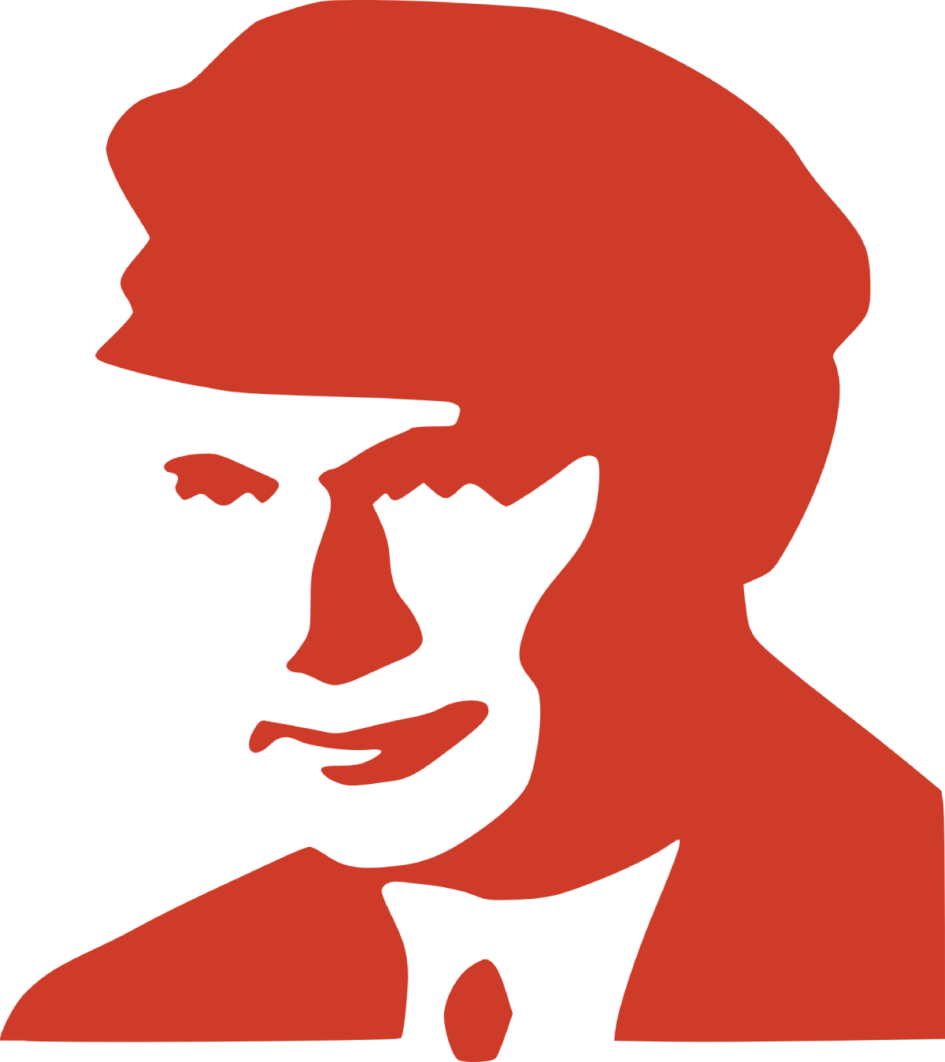 On the occasion of his 135th birthday, we would like to introduce you to Ernst Thälmann, German politician and leader of the Communist Party of Germany, anti-fascist activist and champion of the workers

By Friends of the XI International Brigade

The year 1932 – on the road to fascist dictatorship

The Social Democrats recommended that the arch-conservative and militarist Paul von Hindenburg be elected president of the Reich. Blue-eyed as so often in the assumption that this would stop Adolf Hitler.

Ernst Thälmann expressed his opinion on this wishful thinking in clear and unambiguous terms:

And that is exactly what happened.

Ernst had a way with words—he always cut right to the core. He was a worker, not an intellectual and it took some effort on his part to understand the tenets of Marxism/Leninism— especially with a stomach growling from hunger.

The line from Bertolt Brecht’s poem “In Praise of Learning” is fully applicable in this context: ‘Hungry one, reach for the book—it is a weapon’.

Ernst Johannes Fritz Thälmann was born 16 April 1886 in Hamburg. Like most children of workers, he worked from an early age as a casual labourer and later as a coachman.

During those years, Hamburg was the stronghold of German social democracy, with a self-confident and battle-hardened proletariat. Almost as a matter of course, Ernst Thälmann became a member of the SPD and a short while later of the Transport Workers’ Union.

He experienced the horrors of World War 1 first hand on the Western Front and took an active stand against this war of the capitalist class. Thälmann’s struggle brought him before a court martial. He was sentenced to 14 days’ solitary confinement. That didn’t stop Thälmann from being active in the class struggle. In fact, quite the opposite.

Via the Unabhängige Sozialdemokratische Partei Deutschland (USPD), in 1920, he became part of the newly formed communist movement. Thanks to his great powers of persuasion and his honest personality, Thälmann soon became the charismatic leader of the Hamburg working class. However, this also meant that his life was always in danger.

In 1922, the Thälmann family lived close to the present-day Hamburg Ernst Thälmann Memorial in a side street on the ground floor. June 1922, fascist assassins threw a hand grenade into the flat. Miraculously, Thälmann’s sleeping wife and daughter were not injured in the explosion.

Siemssenstrasse 4, where the assassination attempt was carried out in 1922

The fascist murder bandits relentlessly tried to kill Ernst Thälmann. For security reasons, he moved with his family to the house where the memorial now stands.

Ernst Thälmann and his family moved to this corner house after the assassination attempt in 1922. Seen in the photo: The inauguration of Ernst Thälmann Platz in 1986

His thirst for knowledge was unquenchable. For nights on end Ernst sat at the kitchen table in his flat, reading, writing by hand and learning. His special ability to explain to the common workers in plain language about their class affiliation dates from this point.

After meetings, crowds of young workers would parade through the streets and line up in front of Ernst Thälmann’s house. No one should dare lay even a finger on their ‘Teddy’.

The fascist murders and attacks on anti-fascist workers finally led to the founding of the Roter Frontkämpferbund (Red Front Fighters’ League). Battle-hardened front-line fighters from the First World War formed the core of this self-protection organisation of the proletariat. Teddy was its chairman.

A defining date in the history of the German class struggle took place in Hamburg in October 1923 – the great Hamburg Uprising. It was in this rebellion that Ernst Thälmann was given the code name ‘Teddy’. A name he was to keep for the rest of his life, as it was an expression of trust and love from his fellow fighters.

Due to poor preparation and misjudgements by certain leaders of the KPD and major communication gaps, the Hamburg uprising was an isolated revolt and the Hamburg fighters stood alone. The tragic defeat taught them a crucial lesson, though: only with high discipline and a correct assessment of the situation can the working class win the struggle against an overpowering enemy armed to the teeth. A valuable experience had been gained in building a class struggle party. Ernst Thälmann and his Hamburg comrades became inseparable and a more solid ideological force even after he started working for the KPD in Berlin and became a member of the Reichstag.

Ernst Thälmann’s love for the Hamburg dockworkers is conveyed by his daughter Irma in the following recollection: ‘I asked him a few times: “now that you work in Berlin, why don’t we move to there? Then we could be together every evening.” But he said: “The dockers are in Hamburg. They are our dear friends and we don’t want to live without them. I am happy when I think of you at work; then I think of Hamburg and the harbour at the same time and of dear comrades who fight so bravely with me. That’s why we want to stay in Hamburg”‘.

Only three years after the Hamburg Uprising, all the Hamburg dockworkers went on strike. It was a strike against the consequences of capitalist rationalisation and also in solidarity with the English miners who had been fighting for 5 months.

Teddy was always proud of ‘his’ dockers, calling them ‘outposts of the overall proletariat’.

Thälmann on the strike: ‘The Hamburg strike of 1926 was—to put it in a nutshell—the first major test struggle in Germany against capitalist rationalisation […] Tenacious determination, purposeful fighting discipline, high-class consciousness; these were the characteristics of this strike.’

The years of the Weimar Republic were bloody years. Massacres of workers were commonplace. The Red Front Fighters’ League, the defence instrument of the working class, was banned. The sad climax was the bloodbath of workers on 1 May 1929 in Berlin by bestial police troops headed by Social Democratic Karl Friedrich Zörgiebel, president of the Berlin police. Defenceless workers were hunted down, beaten up and shot in the back.

The purpose was clear: to isolate the KPD from the masses. Despite this disgraceful action by the right-wing SPD leaders, but in the face of the ever-growing fascist danger, Ernst Thälmann reached out to the Social Democrats in 1932 to form a joint “anti-fascist action”. The SPD and trade union leaders refused.

Well, only a short time later, these leaders might have changed their minds when they were placed in Nazi concentration camps.

On 3 March 1933, Ernst Thälmann fell into the hands of the fascists.

The Nazis underestimated the international response to the arrest and were not prepared for the huge wave of international solidarity for Ernst Thälmann. 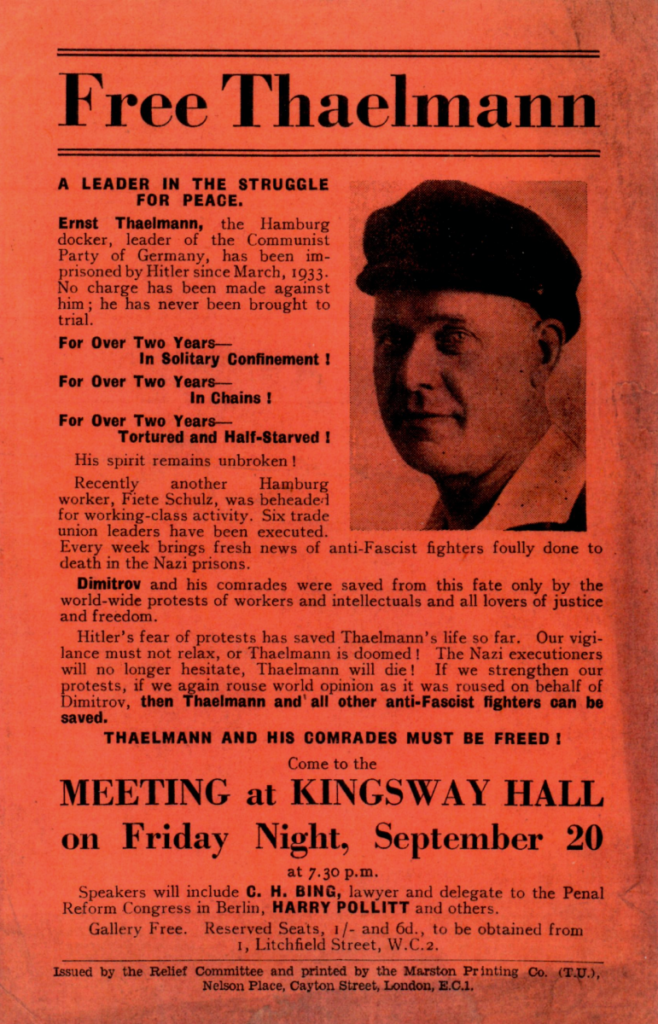 As a representative of the many, many solidarity actions all over the world, we would like to mention the letter by Egon Erwin Kisch, who is considered one of the most important reporters in the history of journalism.

‘DEAR COMRADE ERNST THÄLMANN, you sit alone in your cell of torture, and you do not know how many are with you. Let me tell you, […]. Some months ago, I went to Australia as a delegate to the World Committee Against War and Fascism. At the intervention of the Nazi representation, I was told at the first port in Australia that I was not allowed to get off the ship. Whenever the ship approached a port, however far out in the bays it might be anchored, it was surrounded by boats expressing their sympathy with the oppressed German workers and demanding that the anti-fascist delegate be allowed to go ashore. What was written on the flags they waved, what was written on the banners that stretched across the boats? They wrote, ‘Freedom for Thälmann!’.

You are the German worker, and that is why they want to murder you, the protective troops of Messrs Thyssen, Krupp, the banks and the Junkers. You are the German worker, you are the representative of the German proletariat, you are the leader of the anti-fascists, you are the name of the nameless, you are the symbol of the thousands who were martyred to death and of those who await this fate. Everywhere in the world; in India, in Australia, in Ceylon, the workers ask me. What will happen to Ernst Thälmann? Although the Nazis were foaming at the mouth, the workers of Australia forced my landing, I spoke at hundreds of meetings, some of which the audience exceeded thirty-thousand people. And everywhere people spoke of you, asked about you, comrade Thälmann.

Before leaving Australia, I was to hold a meeting in the last port, Fremantle, for the dockers, and I spoke only of you, the dockworker Ernst Thälmann. These distant colleagues and comrades of yours sent you a telegram of love and solidarity. You will not have received it, but your jailers and their rulers must have read it […].’

The sailors from German ships approached us and extended a brotherly hand. They are working for the overthrow of the blood rule in Germany, dangerous as it is for them. A young comrade from the Nazi ship told us about their fight, and he concluded his account with these words:

‘Of course we can’t send a telegram to Teddy, as much as we would like to. Comrade Ernst Thälmann, in the cell where you sit alone, millions are with you.’

Despite torture, 11 years of solitary confinement in a small cell, Teddy continued to work tirelessly. His letters and notes from his imprisonment bear witness to this.

Ernst Thälmann was murdered by the fascists in Buchenwald concentration camp on 18 August 1944.

In 1956, only 11 years after the victory over Hitler’s fascism, the Communist Party of Germany was banned again in West Germany. Thousands were persecuted and ended up in prison. Many were sentenced by judges who had also sent communists to the penitentiaries during the Nazi regime.

Photos from the celebration of Ernst Thälmann’s 135th Birthday, 16 April 2021 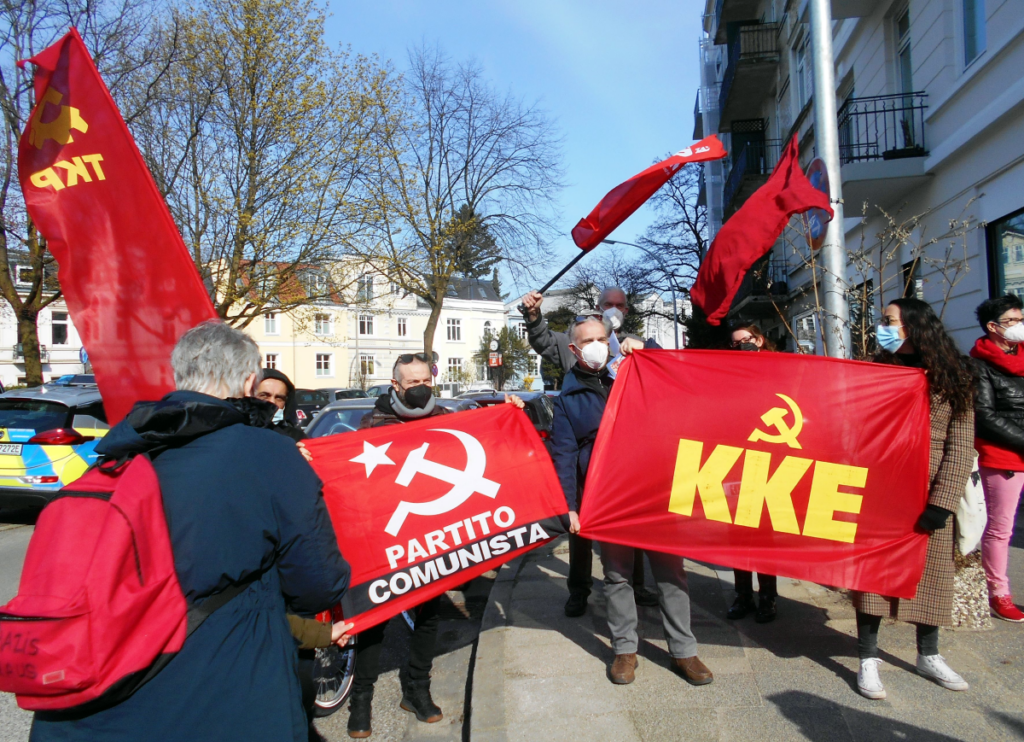 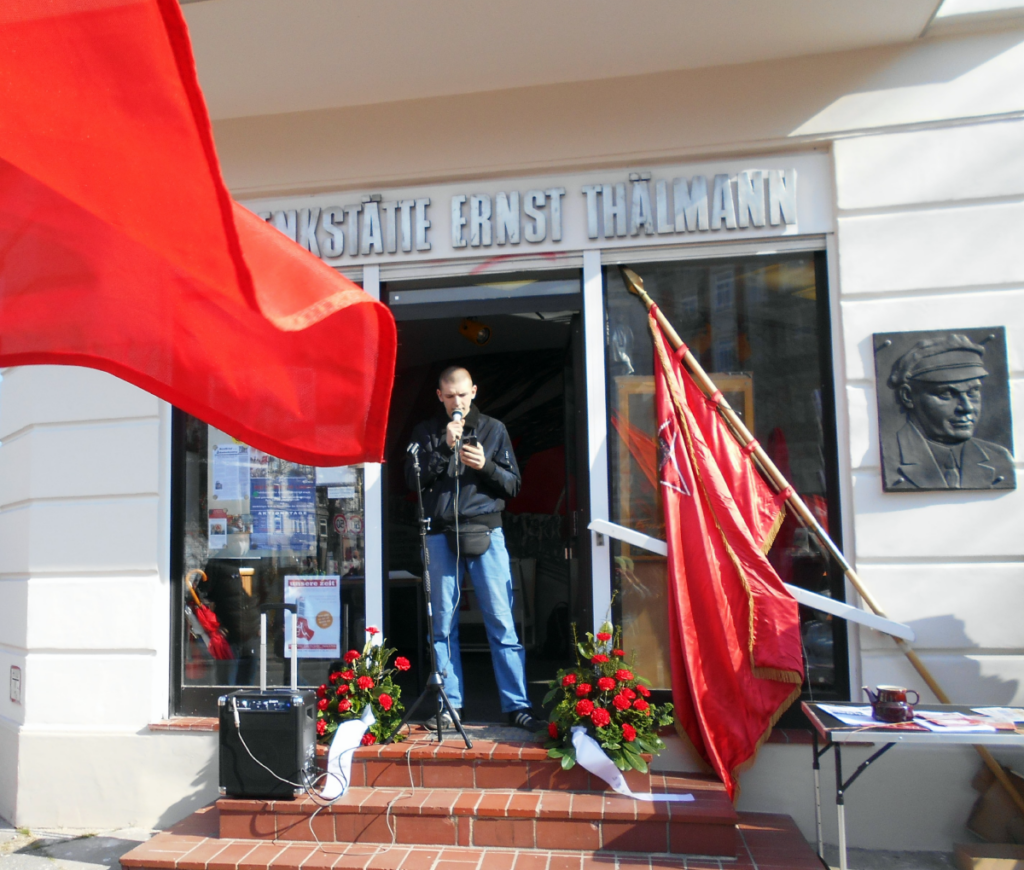 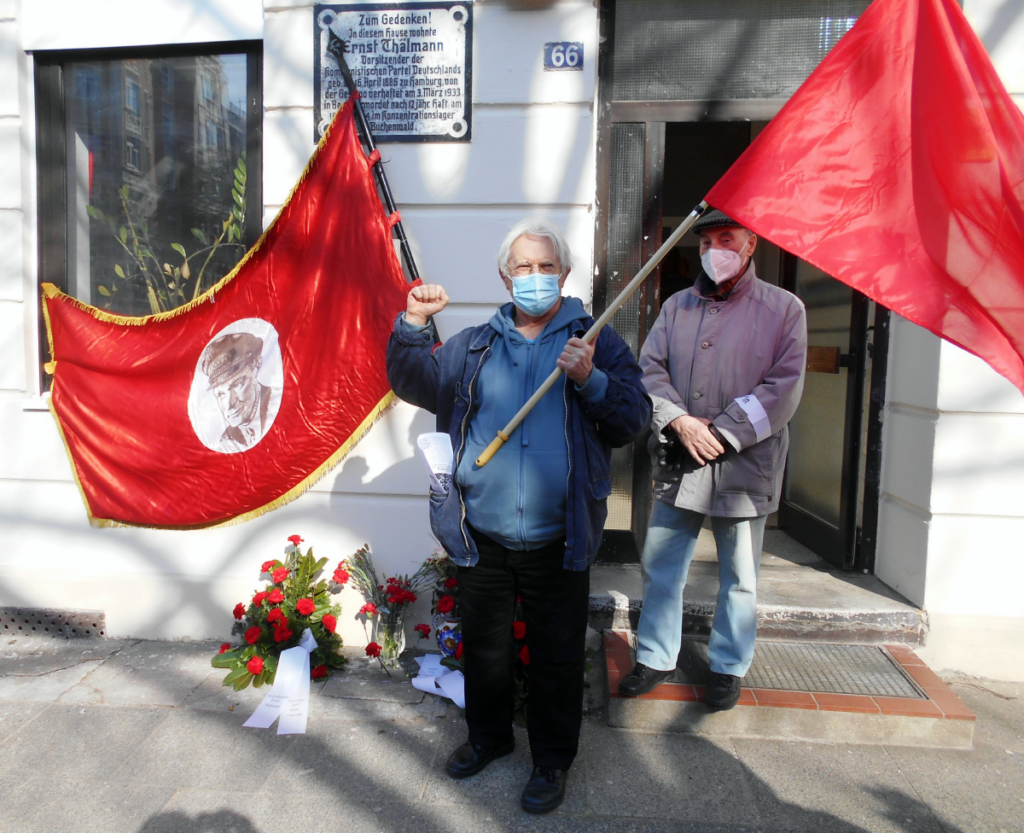