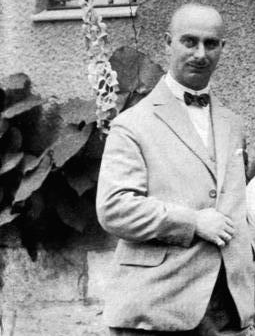 Immediately after the Russian revolution in 1917, the Dutch Intelligence and Security Service initiated an infiltration of the Communist Party of the Netherlands (CPN). The infiltration was controlled by Chief Commissioner of Amsterdam Karel Henri Broekhoff who recruited merchant Julius Barmat as an informant [1].

Barmat made a substantial fortune during the First World War, delivering food from the neutral Netherlands to Germany. For this very reason he was targeted by the British Secret Intelligence Service and he established good relations with the German Intelligence and Security Service, German diplomats and German politicians.

An Ukrainian Jew, Barmat was vehemently anti-Russian because of the anti-Semitic sentiments of the Tsarist autocracy. Expecting trade opportunities with the Bolshevik regime, he joined the Communist Party of the Netherlands. Judging, in the wake of the First World War, that his commercial opportunities were greater with the German social democratic government, he left the Communist Party.

Opportunism and corruption were basically his trademarks. When he bought a second house, he let Broekhoff live in his first house for free. With the support of the Dutch Intelligence and Security Service, he bribed the German government into obtaining huge trade contracts.

By 1923 Barmat had become an extremely wealthy man. Now living in Berlin he was frequently visited by Broekhoff and became acquainted with the Chief of the Berlin police, Wilhem Richter.

31 December 1924, Barmat was arrested for fraud and bribery of ministers, the Customs, the police and civil servants [2].

The combination of being Jewish, having social democratic relations and bribing the social democratic government made him the primary propaganda target of right-wing groups in Germany such as the nationalists and fascists. The significance of the propaganda in Hitler’s election victory should not be underestimated.

The extreme right certainly didn’t; in the 1930s, when Barmat got in trouble with the Dutch authorities, a pro-fascist newspaper attributed, with thinly veiled malicious pleasure, Hitler’s rise to power to Barmat [3]. The Dutch Intelligence and Security Service and Barmat definitely played into the hands of the Nazi Party, adding fuel to the German anti-Semitic fire which the Nazis turned into the Holocaust burning flames of hell during the Second World War [4].

[4] 24 August 1940, Reinhard Heydrich became president of the International Criminal Police Commission, ICPC (the precursor of Interpol) of which Heinrich Müller was a member. On the 20 of January 1942, Heydrich and Müller held a meeting, at which Adolf Eichmann took the minutes, in the guests building of the ICPC at the Wannsee. At that meeting, plans were made for the exterminating of the European Jews.

Within the last few years, several researchers have critically examined the nazification of the ICPC and how the other member countries related to the German policy. As with most international political affairs, it is a complicated matter that cannot be accounted for in a few lines. That being said, we take the view that the other member states considered the persecution of communists such great advantage they turned a blind eye to the persecution of other sections of the population.