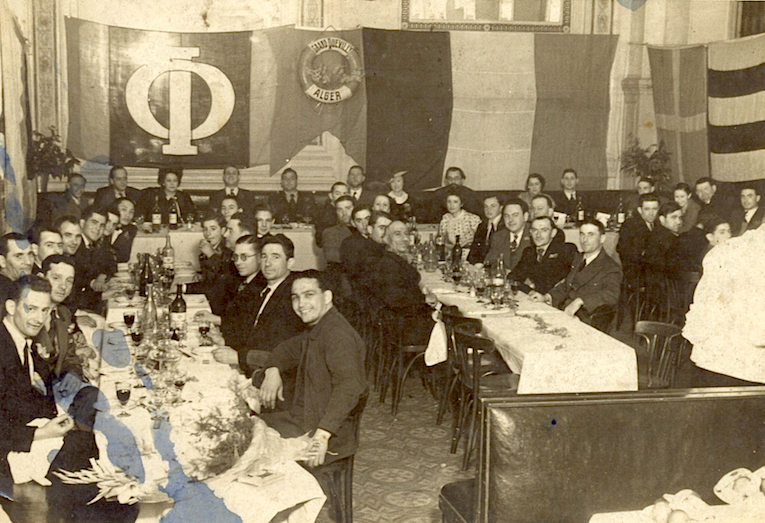 The founding of France Navigation

Directing France Navigation for the French Communist Party were Giulio Ceretti, an Italian emigrant member of the Central Committee from 1932 to 1945, and Georges Gosnat, a communist trade unionist. Under the pseudonym Paul Allard, Ceretti had played an important role in the Comintern and as head of France Navigation.

The idea came from the Spanish ambassador to France, Luis Araquistáin, who envisioned a shipping company that would provide safe transportation of ammunition and other supplies to the Spanish Republic. Previously, materials had been delivered by Moscow and transported by Soviet ships from the Black Sea and Murmansk.

France Navigation was organised to ship food, ammunition, weapons and military vehicles to Spain. This was in fact clandestine because France subscribed to the Non-Intervention Pact. The ships departed from ports in north-western Europe and the Mediterranean Sea. Then, weapons purchased in Belgium, Czechoslovakia, Poland or elsewhere were loaded in ports such as Gdynia, Rotterdam, Copenhagen, Oslo or Hamburg. These cargos were described as destined for fictitious destinations such as Greece or the Middle East. The ships then sailed under the flags of other countries to various ports in Spain. <

The crew members were carefully recruited and the documents might state, for example, that the cargo was ‘agricultural equipment’ while it was in fact grenades, as with the SS Guilvinec that France Navigation purchased in 1937. The first freighter (SS Lucie Delmas) was bought for 1,800,000 francs (the equivalent of 1,062,000 dollars) This amount was borrowed from L’Humanite and the PCF, while the Spanish Republic agreed to pay for freight and insurance.

France Navigation succeeded, not least because of strict management, in buying 24 ships, preventing virtually all interruptions in the supply of all various kinds of weapons to Republican Spain. In addition, its cargo ships evacuated children from Bilbao in 1937, and in 1939 evacuated Republican soldiers and political leaders who had been trapped in the last pockets of the resistance.

The Dutch and France Navigation

The company France Navigation was headed by a five-member board chaired by Joseph Fritsch, a Parisian communist activist. The Dutch and Belgians also played an important role in the organisation, including the brothers Daniel and Marcel Mozes Wolf, owners of a business empire in Europe and involved in arms transport.

Felix Raphael Pierot from Rotterdam was a shipbroker and a member of the family firm. Jacq. Pierot Jr. & Sons.

During Édouard Daladier’s third term as French Prime Minister (10 April 1938 – 21 March 1940) he revoked the obligation to defend Czechoslovakia against Nazi Germany. Unlike Neville Chamberlain of Great Britain, Daladier had no illusions about Hitler’s ultimate goals and on 30 September 1938 the Munich Agreement was signed by Daladier, Chamberlain, Hitler and Mussolini. The French communist delegates voted unanimously against the agreement.

Subsequently, tensions in the French government and parliament increased, as did the pressure on France Navigation. On 7 March 1939, the French Minister of Merchant Marine, Louis-Marc-Michel, comte de Chappedelaine, refused to attend the inauguration of France Navigation’s new buildings. On August 23, 1939, in Moscow, the Soviet Union (represented by Molotov) and Nazi-Germany (represented by Ribbentrop) signed a German-Soviet nonaggression pact officially known as the Treaty of Non-Aggression between Germany and the Union of Soviet Socialist Republics—also known as the Molotov-Ribbentrop Pact.

In September 1939, an extremely tumultuous phase in the history of France Navigation began against this background. The French government turned against France Navigation, more or less forcing it to go underground. The activities and management of France Navigation were investigated by the French government and five of its leaders were arrested: Fritsch, chairman of the board, Legrand, general manager, another officer and two Dutchmen: Jan Maurits Elias van Castricum and Adrianus Heesterman, who ran the company through another company. Despite French laws prohibiting the sale of ships under foreign flags in times of war, the Dutch intermediaries had tried to sell the fleet to foreign shipowners.

On 12 October 1939, The French government sold France Navigation’s ships to French companies in Marseille. The prisoners went to the maritime prison on the island of Domègues [1] and were later transferred to Toulon.

The company broker Felix Pierot of Jacq. Pierot Jr. & Sons, from Rotterdam, was also arrested. He too was imprisoned in the maritime prison of Toulon and interrogated about France Navigation. Pierot stated that he had acted in good faith and was unaware of France Navigation’s ownership. Ultimately, Felix Peirot was released and returned to Rotterdam. On August 22, 1940, the case against France Navigation was dismissed for lack of evidence.

After his release, Pierot and his family fled to America. Daniel Wolf was in Brussels on May 9, 1940 (the day before Belgium was invaded by Nazi Germany) and escaped the war; he travelled to Brittany and from there to England. Daniel Wolf’s personal and business possessions were taken over in the Netherlands on 1 November 1940 by the Reichskommissariat für die besetzten niederländischen Gebiete (Reich Commissariat for the Occupied Dutch Territories). A few months later, Daniel Wolf fled to New York City. Daniel’s wife, Henriette Jeanette and daughter stayed in the Netherlands. They did not manage to escape in time and ended up in Bergen-Belsen Concentration Camp but survived the war against all odds.

[1] We have not been able to verify this information, as there is only a circular reference from the article ‘Cargo SS DAIRIGUERRME ex LUCIE DELMAS (1925-1937)‘ upon which this passage of the book is based and the reference upon which this article in turn is based, namely ‘Cinq Dirigeants de la Compagnie Maritime “France-Navigation” ont été arrêté‘, La Figaro, 13 October 1939. Our guess is that La Figaro has made a mistake which the article in question has reproduced.