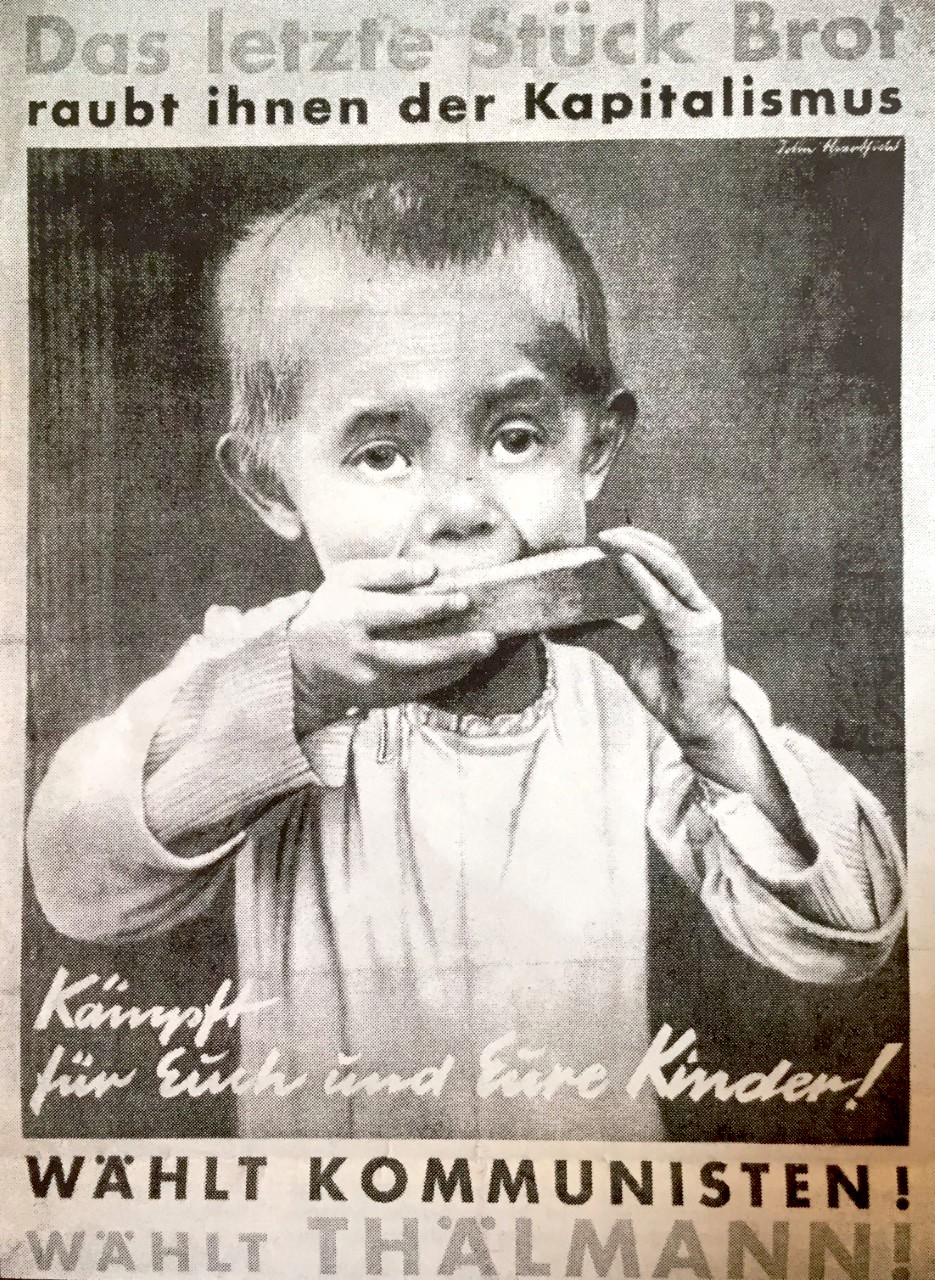 John Heartfield was a highly productive artist, especially in his young adult life. He is perhaps best known for his 240 photomontages, but he was also an accomplished scenographer and editor and the co-founder of a magazine as well as a publishing house

You’ll probably recognise many of Heartfield’s photomontages. We have selected a few works relating to the Spanish Civil War and some of his more rarely shown works. 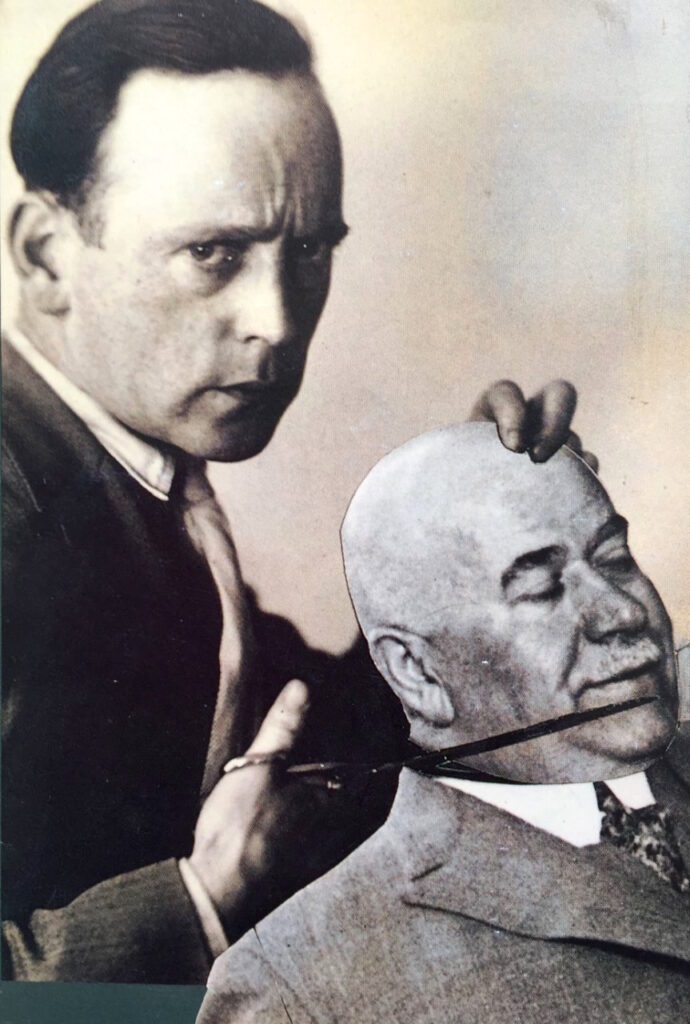 John Heartfield – a pair of scissors and paper in hand

John Heartfield is born in Berlin, Germany 19 June 1891 as Helmut Franz Josef Herzfeld. In 1916, he changes his name to John Heartfield in protest against the anti-British sentiment in Germany, expressed, for example, in the manner of which people greeted each other: ” – God punish England – May he punish it”. 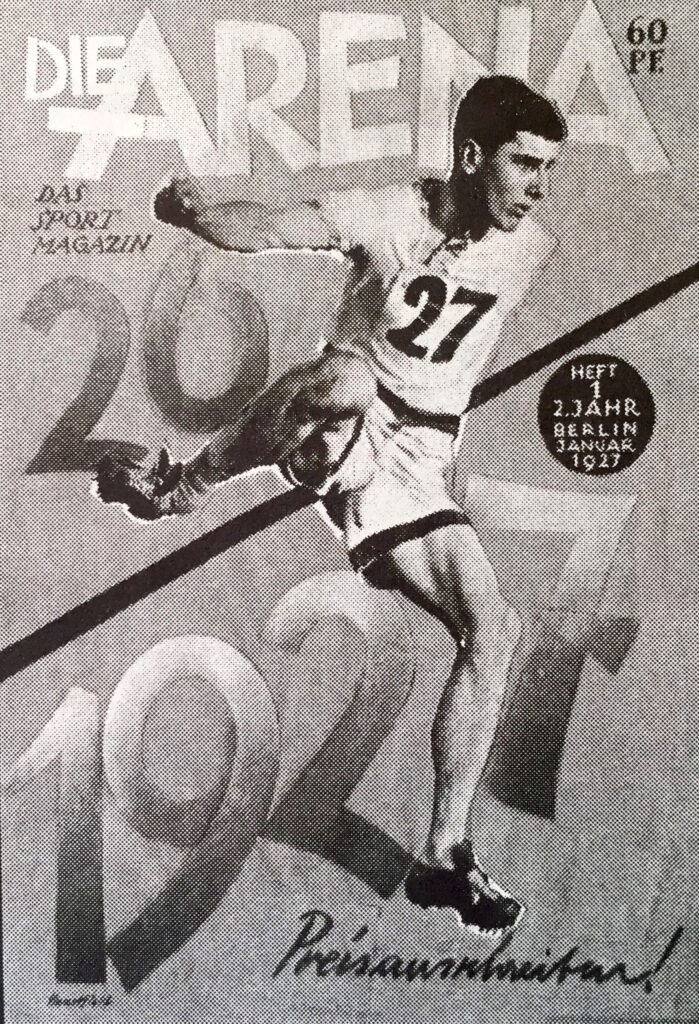 Heartfield studies art at the Royal Bavarian Arts and Crafts School in Munich from 1907 to 1913 and at the Arts and Craft School Berlin-Charlottenburg from 1913 to 1914.

He joins the circle of artists associated with the magazines Der Sturm (‘The Storm’) and Die Aktion. The group’s central members are publishers Herwarth Walden and Franz Pfemfert. Artist George Grosz (who has changed his name from Georg Gross) is also part of the group. Grosz and Heartfield soon develop a close friendship and engage in a longstanding collaboration as fellow artistic rebels.

With his brother, Wieland Hertzfeld, Heartfield founds the magazine Neue Jugend (‘New Youth’) in 1916 and the publishing company, Malik in 1917. 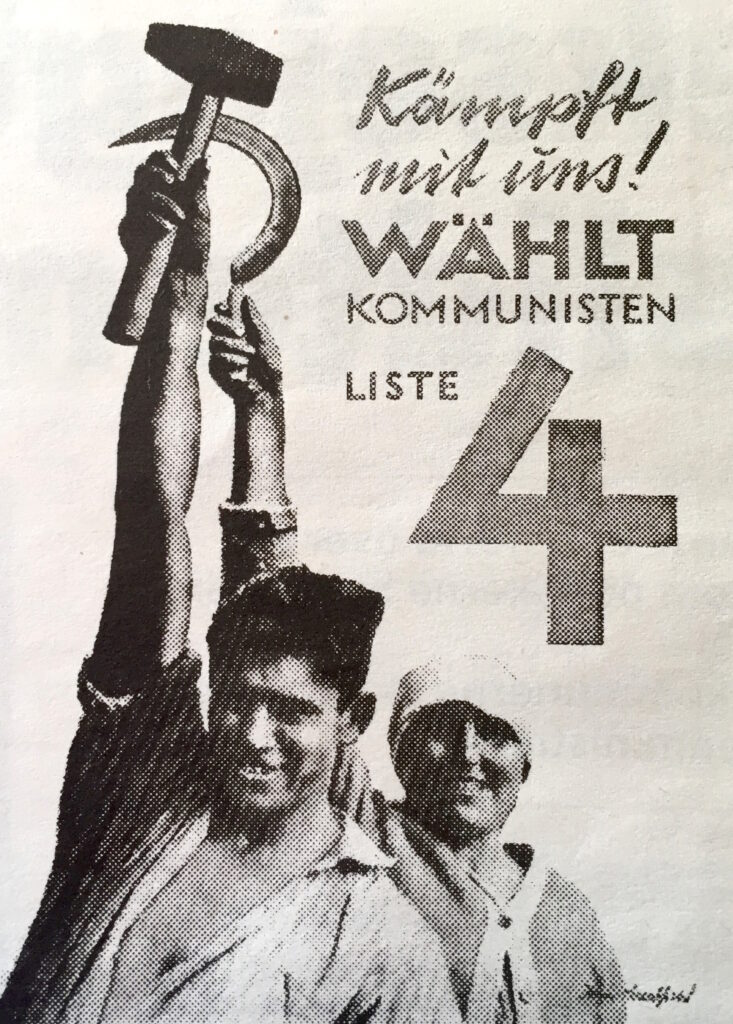 The October Revolution in Russia and the political situation in Germany intensify his political views. As one of the leading members of the Dada group, Heartfield now insists on greater political clarity and commitment in the artistic work. 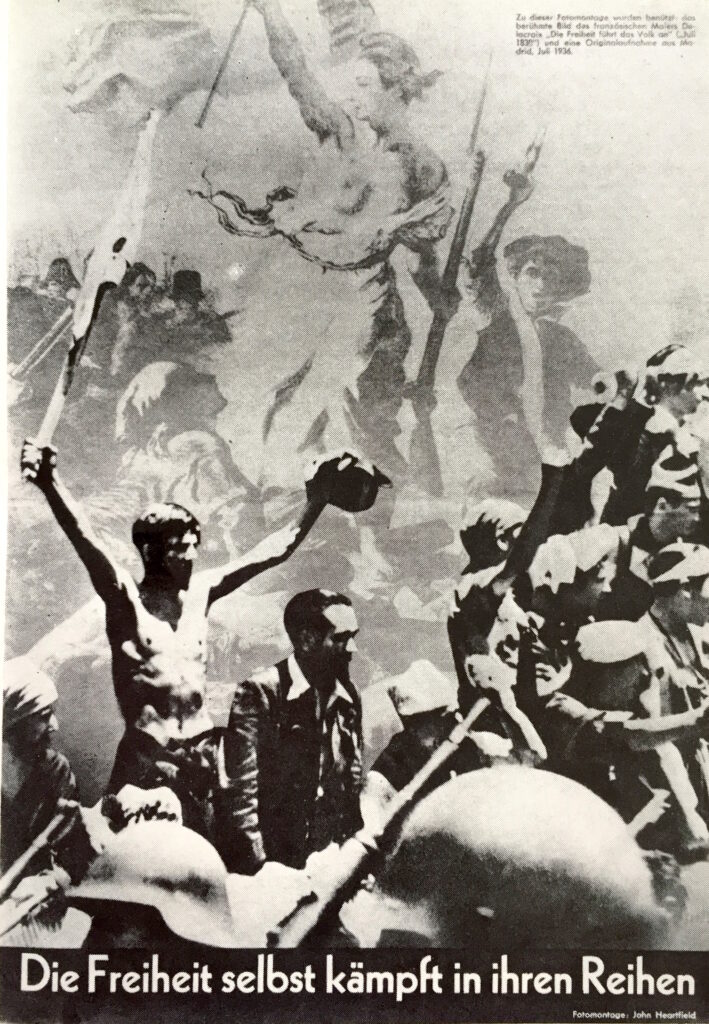 Spanish Civil War work (1936): “Freedom itself fights in their ranks”. The famous painting af French painter Delacroix ‘Liberty leading the people’ from 1830 is montaged with original footage from Madrid, July 1936

Photomontage as a political weapon

Heartfield comes to the realisation that photomontage is a highly viable approach to the enhancement of a greater political awareness and understanding among the general public, his theory being that photomontage can and must demonstrate what the world is and not what it looks like. 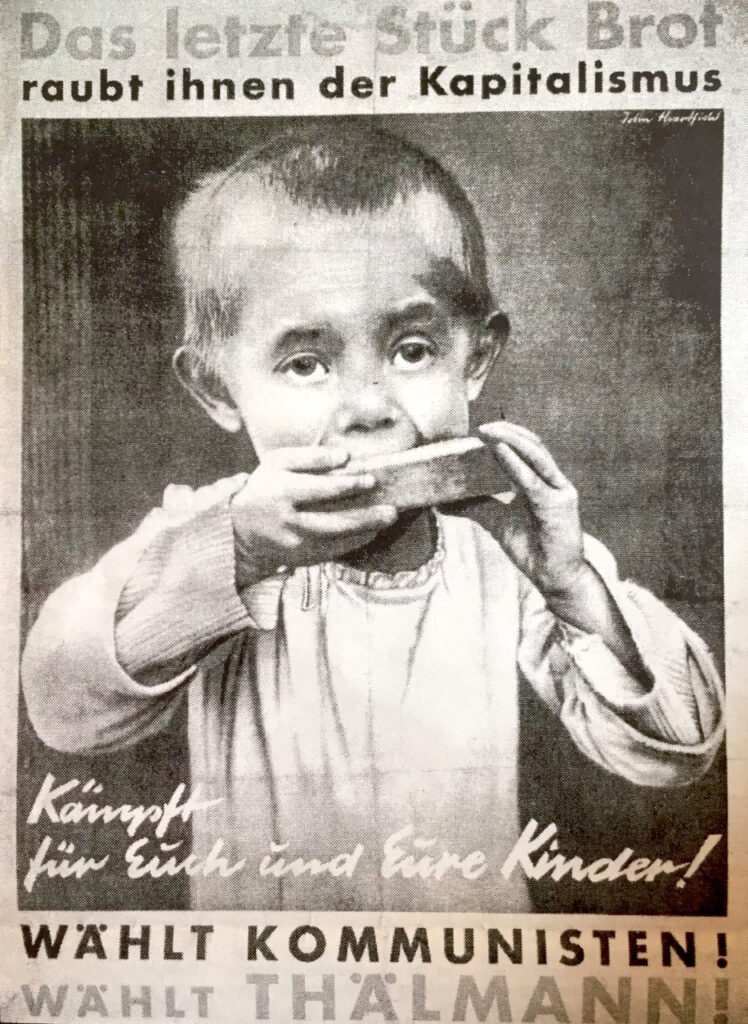 “Capitalism robs you of the last piece of bread”. Election poster, the Communist Party of Germany (KPD)/Ernst Thälmann, 1932

During the years of 1920-1923, Heartfield works as a scenographer for theatre directors and producers Erwin Piscator and Max Reinhardt (original name Max Goldmann). Heartfelt creates photomontages for the communist paper Der Knüppel (‘The Cudgel’), which he and Grosz co-edit from 1923 to 1927. In parallel, he creates covers and posters for the Party newspaper Die Rote Fahne (‘The Red Flag’). It is, however, as a staff illustrator (1930-1938) for the magazine Arbeiter Illustrierte Zeitung (‘The Workers’ Illustrated Paper’) that his thoughts and ideas gain momentum. 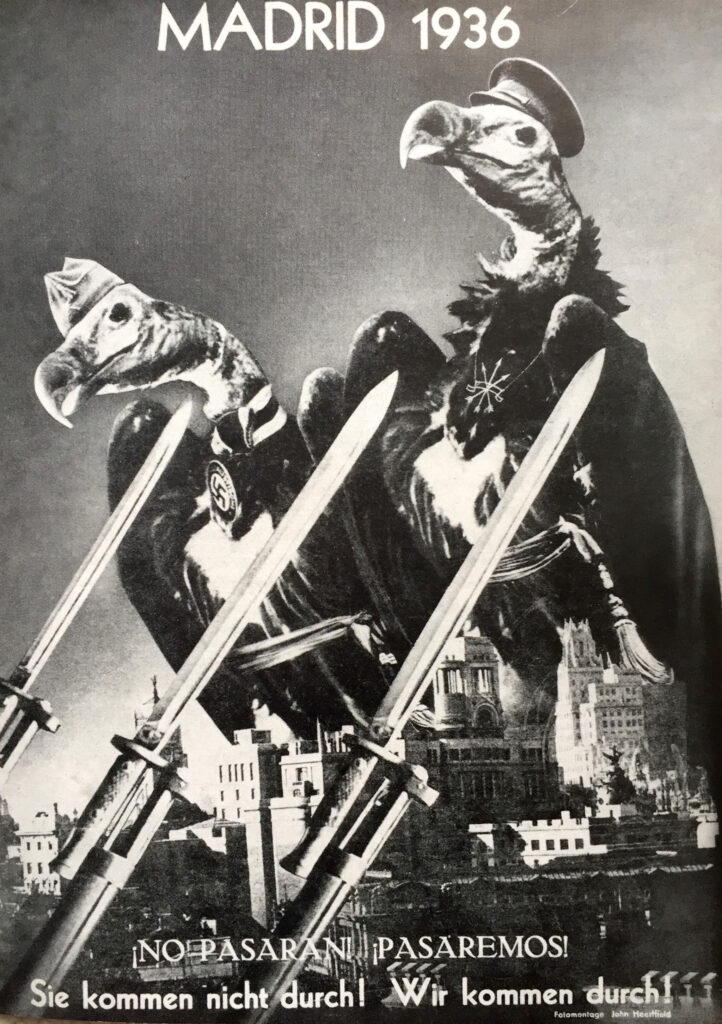 Having been denied a residence permit in England, Heartfield returns to Germany in 1950. He settles in Leipzig (then in East Germany) and later moves to Berlin (also in East Germany), where he lives until his death 26 April 1968. 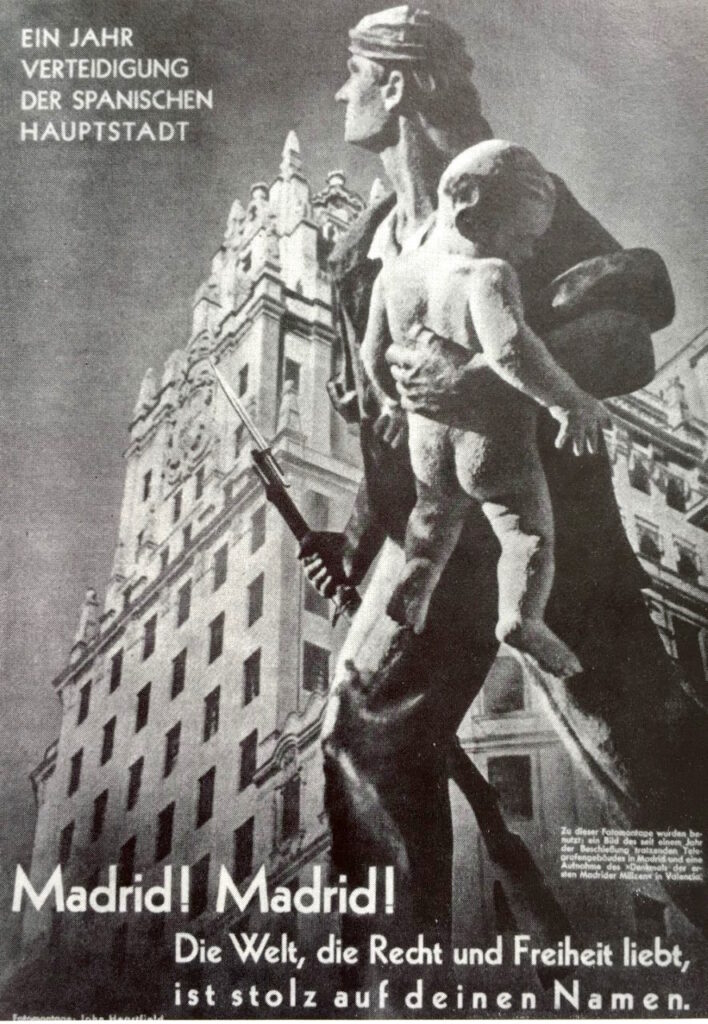 “One year’s defence of the Spanish capital—Madrid! Madrid!—The world’s lovers of righteousness and freedom are proud of your name!”