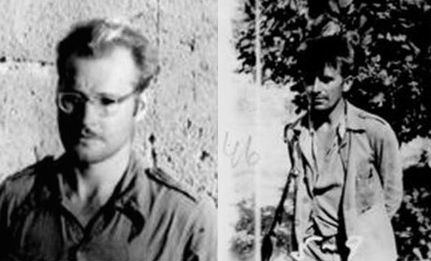 Willi (Wilhelm) Schütt, a sailor from Hamburg-Altona, who fought on three continents

Willi (Wilhelm) Schütt was born In Hamburg-Altona in 1908. At the age of 15, Willi Schütt made his first journey as cabin boy on the two-masted schooner Edelgard on the Baltic Sea.

During the inflation in August 1923, he received his final salary (25,000 Mark), which was barely enough to pay for the railway ticket to the seamen‘s labour exchange in Hamburg.

Because of Willi’s experiences on German ships; the tone of the officers’ commands and their enforcement of slavish obedience, he chose to travel under a different national flag.

Willi sought employment with the British Merchant Navy and soon became a class-conscious seafarer. He sailed from Cardiff with ‘black gold’ (coal from Wales) to South Arabia.

Due to inadequate equipment, a docker had a fatal accident during cargo unloading. The 34 crew members immediately went on strike. This display of solidarity of the seafarers with the dockers made a deep impression on Willi. Cabin boy Willi became ‘Bruder’ (‘Brother’) and a member of the seafarers’ trade union.

Willi further developed his revolutionary views aboard a Swedish barque; Christian Christiansen, the bearded Danish seaman from Tønder in South Jutland, told him about the revolutionary seafarers in Odessa, Petersburg and Kiel.

Willi’s involvement in the labour struggles on the British ships and Christiansen’s stories turned him into a ‘Red’.

At the end of the 1920s, during the Great Financial Crisis, Willi arrived in Australia onboard the ship on which he currently worked. The ship had no cargo and had to go into lay up.

In Sydney, he became a member of the Communist Youth. In order to sustain himself, Willi was forced to accept any type of work and thus became a miner in New South Wales.

Strikes and struggles were the order of the day and he soon became a member of the miner’s trade union’s strike committee. As a labour activist, Willi struggled to keep a job for an extended period of time. Consequently, at Christmas time, he sold Christmas trees amid the Australian summer heat (winter in Europe).

Willi was a man of many talents and at the request of his comrades, he became editor of the Young Communist newspaper The Young Worker. Writing was not the only new skill he sought to master; operating the winch of a ship at loading and unloading was another.

When the Australian government imposed an overnight embargo on the USSR, hundreds of dockers, with Willi as winch operator, loaded breeding sheep destined for the Soviet Union onto a Norwegian ship before the embargo began.

For 3 years, Willi worked and fought in Australia, followed by 7 years in the USA.

With a 10-month residence permit and a couple of hundred dollars, he landed in Portland, USA. His destination was New York. He hitched the 1000 kilometres and at the office of the Communist Party USA on 14th Street in Manhattan, Willi reported about the 18 million unemployed in ‘God’s own country’, misery at every corner and jobs as rare as spring water in the desert.

Willi was trained as agitator in the workers’ club Workers Centre and did practical work amongst the youngsters of the ‘Red Hook’ working class district on the Hudson River.

Willi’s first action, in front of the Robins Dry Dock, ended with a demolished pulpit and two black eyes for Willi carried out by thugs paid by right-wing trade union bosses. Next time, ‘Willi’s boys’ were prepared – and not only with arguments.

At the outbreak of the Spanish Civil War in 1936, Willi and his comrades protested against the intervention of the Nazis in Spain in front of the German Consulate General. He decided to follow the call of the Comintern and go to Spain. There was a problem however; his German passport had expired and the German consular employee did not believe that he wanted to return to Germany (“Heim ins Reich”). But ultimately he managed it, even without travelling money.

The Soviet travel agency Intourist paid for Willi’s passage and that of another of the 59 comrades on the MS Rotterdam to Europe. From Perpignan, by night, they walked across the Pyrenees to Figueras in Spain and on to the artillery base in Almansa.

He became an advanced scout and fought in the Jarama Valley with the 15th Brigade against Franco’s Moroccan troops, among others.

Willi Schütt, the seafarer from Hamburg, fought alongside the docker Walter Schuetrum from San Francisco against the ‘Moors’ and both were severely wounded. After their recovery, they continued to fight with the 15. Brigade at Ebro.

After the demobilisation of the International Brigades, Walter Schuetrum was able to return to the USA, but Willi was sent to various French detention camps. Walter had promised Willi never to forget him and he managed to obtain release from internment of Willi and other comrades.

Willi Schütt’s task was to organise passage for the Brigades in the port of Le Havre. Only on this condition, almost 200 fighters of German, Czech, Polish and other nationalities, who went into the fight from USA and Canada, were allowed to leave the country.

Willi was able to fulfill the task with the help of French dockers. He himself also reached Canada as seaman.

On board the same ship, Willi sailed for London, where he signed off. In London, he was classified as a ‘foreigner’ by a British tribunal and transported to Seaton. However, the Communist Party of Britain and the London trade unions managed to secure Willi’s release. Subsequently, he found work as a lathe operator producing drills for English mines and became active in the British metalworkers’ trade union. London was also the place where Willi was married to an Austrian comrade.

Faithful to their cause and each other

When the war ended, he wrote to his comrade Walter Schuetrum: “We too will follow the call of the Socialist Unity Party of Germany and go where our true home is.”

Willi went to Sassnitz on the island of Rügen and worked in the fishing industry. Due to the severe injuries he sustained in the Spanish War in combination with various diseases, the doctors prescribed a change of location from the harsh coast climate to Thuringia. Willi moved to Erfurt, the capital of Thuringia, where he stayed until his death.

30 years after the Spanish War, Willi met Walter Schuetrum again in the German Democratic Republic. Both had remained faithful to their cause. Throughout the years, they maintained an animated correspondence. In one of his letters, Walter Schuetrum, wrote: “Our struggle has not been in vain!”

The war transformed me “into a nut the fascist will never crack … Our minds become different from what they were, impressions are seared into our memories, we become conscious fighting anti-fascist in a cause that eclipses everything!”
Walter J. Schuetrum

A docker with politics in his veins 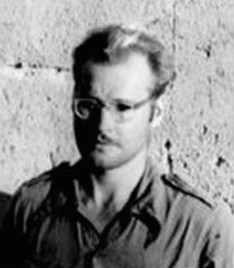 Walter J. Schuetrum was born in Superior, Wisconsin on 18 October 1911. The son of a German-American miner turned switchman for the Great Northern Railroad who was an avid trade-unionist, Schuetrum early in his life developed a concern for political and labour issues.

In 1937, he volunteered for service with the Loyalist forces in Spain. In Spain, he became an ambulance driver, and was present at many of the War’s crucial battles. In the aftermath of the Battle of Teruel, he was reported deceased, misinformation that was publicised in Wisconsin Newspapers and only corrected after he wrote a letter to his family assuring them of his safety. 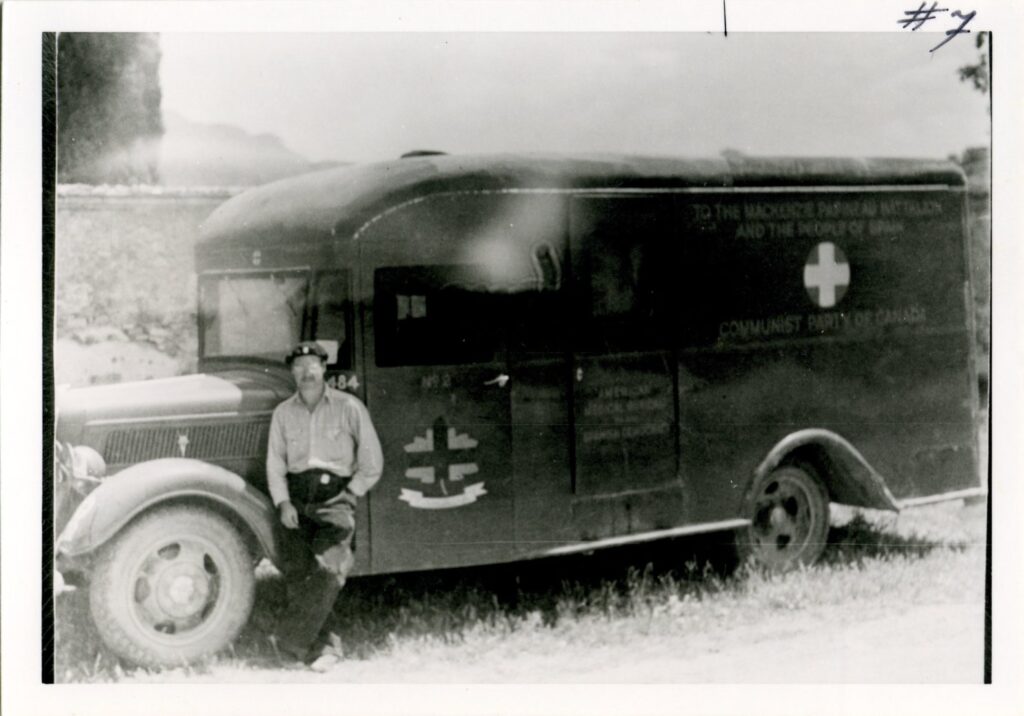 The Spanish Civil war reinforced Schuetrum’s political beliefs. He wrote: “I had never realized before coming to Spain what the real truth of democracy could mean and with what furious proportions one could hate” [1] The Spanish Civil War transformed me, he wrote “into a nut the fascist will never crack … Our minds become different from what they were, impressions are seared into our memories, we become conscious fighting anti-fascist in a cause that eclipses everything!” [2]

Carrying on with the fight

After the Spanish War, Schuetrum returned to Wisconsin and soon after moved with his wife, Viola Schuetrum, to San Francisco. On the West Coast, he got a job as a longshoreman and became an active member and organiser for the International Longshoremen’s and Warehousemen’s Union. During World War II, Walter Schuetrum joined the US Army, but because of his involvement in the Spanish Civil War, was barred from fighting overseas and instead worked as an instructor on land ships at the Indiantown Gap Military Reservation in Pennsylvania. He was discharged in 1946 and went on to get his seaman’s papers and work on merchant ships in the Pacific, where he organised for the National Maritime Union.

In 1961, Walter Schuetrum, along with other veterans of the Abraham Lincoln Brigade, was invited to the German Democratic Republic (DDR) and spent three months there. In the same year, with other veterans who were on that trip, he establish the Bay Area Post of the Veterans of the Abraham Lincoln Brigade (VALB). Although Walter never held an administrative position in VALB, he was nonetheless directly involved in many of its activities and proceedings. He returned to East Germany three times in the 1970s and traveled to Spain with other US veterans in 1982. Walter Schuetrum died in 1986.