The Spanish Monument – from Idea to Reality 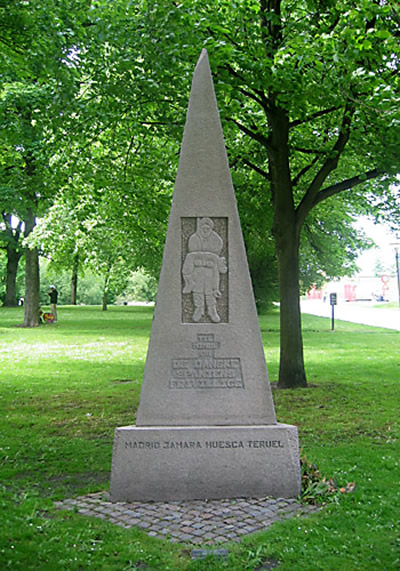 The monument to the Danish volunteers who fell in the Spanish civil war, located in Churchill Park on the Esplanade in Copenhagen, has a chequered past. Chequered, in the sense that the will to raise the monument was ever present, but for many years, multifarious contemporary problems put an obstacle to the implementation of the idea. However, a flame had been lit and kept on burning – on the back-burner, though. The dream was that one day the idea of a monument would become reality – and it did!

17. October 1946, on the 10-year anniversary of the establishment of the Brigade in Albacete, the Association of Danish Volunteers in Spain had a party. On this occasion, a small pamphlet was published in which the then Chairman Poul Erik Dreyer, among other things, wrote: “Approximately 100 Danish comrades never returned, they fell in battle. Today, on the 10-year anniversary, the rest of us must promise that we will honour their memory. Give them a worthy memorial – it must be raised.”

From thought to action

A beautiful and heartfelt thought shaped in writing, however, time asked other and new demands of the individual. The Cold War was launched with Churchill’s Fulton Speech, peace in Europe was threatened and domestic political problems lurked.

Many issues had to be addressed and consequently, the vision of erecting a monument was pushed into the background making room for more urgent matters.

Through the years and under successive Chairmen, the topic was addressed at several of the Association’s meetings and General Assemblies, but no final decision was made.

However, the vision of raising a monument was revigourised in the early eighties – probably inspired by, among other things, the fact that the Association of Swedish Volunteers in Spain had raised a monument in Stockholm and the 50-year memorial day of the outbreak of civil war in Spain imminent, as was the establishment of the International Brigades.

Setting-up of the Committee

Egon Farcinsen, who had chaired for a number of years trying to hold together the pieces of a more or less moribund association, retired on 17. 1984 at the

General Assembly and a new board was elected consisting of Egon Gissel, Eigil Buch and Willy Petersen with Marius Christiansen as Chairman.

One of the first items of the board meeting agenda was section 3: “Memorial to our fallen comrades”. From then on, things went swiftly and on the 24. August, a group of people, with Henning Tjørnehøj from LO (head organisation of Danish trade unions) as prime mover, called a meeting resulting in the establishment of a committee called the ‘Komiteen for de danske spaniensfrivilliges minde’ (‘Committee for the Danish Volunteers in Spain Memorial’). The committee eventually consisted of Marius Christiansen, Villy Fuglsang, Søren Hansen MP, Børge Houmann, Frode Jakobsen, the author Albert Petersen and Henning Tjørnehøj. At the meeting, it was agreed to raise a monument near the The Museum of Danish Resistance (Frihedsmuseet). Furthermore, it was decided to start raising funds and consequently a giro account was opened. Lawyer Jørgen Christensen volunteered to administer the funds free of charge.

Which artist? Which monument?

The Committee immediately began gathering suggestions for potential artists and the design of the monument. Knud Nellemose, Robert Jakobsen, Per Ulrich and Gunnar Westmann were all suggested as potential artists, but ultimately, Per Ulrich was asked to create the artistic design.

As easy it was to agree on the artist, as difficult it was to agree on the design of the monument. Following many and long discussions and several visits to Per Ulrich’s studio, where the artist showcased several monuments in metal, concrete and stone, respectively, it was decided to follow Per Ulrich’s suggestion: a linear triangular pyramid stele with obliquely cut stems in fibre concrete. Incidentally, Per Ulrich believed that the monument could be made for approximately 200.000 DKK.

The National Cultural Foundation (Statens Kulturfond) committed appropriation for the implementation of the task, which meant, according to the Foundation’s articles of association, that the Committee were to obtain the 50,000 DKK. On this basis, an agreement was made among the National Arts Foundation, the artist Per Ulrich and the Committee. The agreement contained a detailed description of the monument’s size and shape and distribution of competence.

The location of the monument

Apart from the task of putting the fundraising on rails, another task presented itself: obtaining permission to erect the monument in Churchill Park vis-a-vis The Museum of Danish Resistance.

The Park belonged to Copenhagen municipality why the Committee initially approached Lord Mayor Egon Weidekamp, who referred the Committee to State Architect Eivind Lorenzen – and now the tribulations really started. First and foremost, the State Architect did not approve of locating the monument in the Churchill Park as it was, to his opinion, already crowded with sculptures. Secondly, he did not like the draft for the memorial that Per Ulrich had sent. After many and long negotiations, they succeeded, however, in reaching an agreement on the original proposal for the monument and the location in Churchill Park.

Raising 50,000 DKK turned out to be difficult, and in February 1986 only half the amount had been raised. Furthermore, the project had become even more expensive as it had been agreed to create the monument in granite. The Committee now had to raise 62,500 DKK.

Taking the present situation into account, the Committee wrote to a series of trade unions asking them to ‘cough up’ some money. Eventually, the money was scraped together, primarily thanks to the trade unions. The Committee even succeeded in raising 68,000 DKK leaving enough money for a little festivity in conjunction with the unveiling of the memorial.

Arranging the actual unveiling of the memorial was next. The plan was that it would take place on the 17 October – the anniversary for the establishment of the International Brigades in Albacete, Spain. But the date had to be postponed because the Spain volunteers were invited to Spain during this period to celebrate the establishment of the Brigades. 1. November was chosen instead.

Everything was ready: the artist had completed his part of the project, the stonemason was putting the finishing touches on the work and the programme for the day was set. Then, at the eleventh hour, problems arose: the city architect tried to shift the location of the monument from the agreed location to somewhere further inside the park and in the City Council, the Conservatives, led by head of the Cultural Administration Axel Clausen, denounced raising the monument. According to Berlingske Tidende [1] (Berling’s Times) the the denouncing took place the 30. October 1986 and according to Land og Folk [2] (Land and People) the 1.-2. November 1986 the argument being that raising the monument would be “a challenge to the democratic Spain”.

As the proverb goes, “Well, that really takes the biscuit!” You could also add: “it is, as it were, the icing on the cake”. But on the other hand, keeping in mind what we are experiencing today, one can expect the most incredible and bizarre acts from that quarter.

The memorial for Danish volunteers in the Spanish Civil War in Churchill Park, Copenhagen

The unveiling of the monument

As mentioned in the above, the unveiling was to take place on the 1. November. At three pm, people started gathering in The Museum of Danish Resistance and soon thereafter, the place was packed with people, trade union and party flags. Henning Tjørnehøj gave a welcome speech and then the attendance sang Martin Jensen’s beautiful song from 1937, “En hilsen til jer kammerater” [“Comrades, we salute you”]. Next, Villy Fuglsang held a speech in which he said, among other things: “Comrades and friends. On behalf of my comrades, let me thank all of you who have come here for the unveiling of the memorial to our comrades who paid with their lives in the Spanish people’s fight for freedom – and to the peoples’ joint struggle against fascism and risk of war. Thanks to those who took the initiative to ensure that, also in Denmark, a lasting memorial is raised to the ”Voluntarios Internacionales de la Libertad” – “Volunteers for Freedom”, as the small emblem writes, which to us is a badge of honour and a commitment. I hope I am not stepping on anyone’s toes when I now mention Henning Tjørnehøj as the tireless, understanding and driving force of the committee that has worked with the case”.

Finally, the Spanish Ambassador in Denmark, Joacuin Ortega held a speech in which he said, among other things, “It is a great honour to represent my country at this tribute to the courage, the sacrifice and the thirst for justice that emboldened young people from Denmark to fight for their ideals on Spanish soil, such as the young barber, who affirmed his enthusiasm and life optimism in the diary which lent its name to the film, which was recently made ​​as tribute to the front fighters”.

Then people gathered around the monument, where Chairman of the Association of Danish Volunteers in Spain performed the actual unveiling.

At long last, the Danish volunteers in Spain finally got their monument – 50 years after the Civil War broke out and 40 years after the first thoughts about “raising a worthy memorial for the comrades buried in Spanish soil” were put in writing.

[2] Initially, an illegal newspaper founded in 1941 by the Danish Communist Party. After the war, a daily newspaper. Closed down in 1991