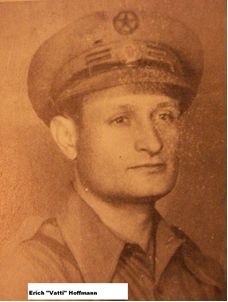 Erich Hoffmann was a German communist worker from Hamburg who dedicated his life to the fight against fascism. As part of this fight, he helped save close to 200 Hungarian children in Auschwitz and Buchenwald

By Thomas Mayer/Revision and translation editing by Maria Busch

Erich Hoffmann was born 13 February 1906 in Zerbst, Saxony. The family soon moved to Kiel where his father had found employment as a shipyard worker.

After he finished primary school, Erich got an apprenticeship as a foundry moulder at the Germania shipyard in Kiel. When he joined the union, it did not take long for his comrades to realised that Erich was a man who was particularly helpfull and considerate towards all of them.

These traits earned him the nickname ‘Vatti’ (‘Daddy’). His friends was to address Erich Hoffmann by this name until his death.

In 1922 Erich became a member of the Kommunistischer Jugendverband Deutschlands, KJVD (the Young Communist League of Germany). About this time he began writing for the Communist press and the Germania shipyard communist trade union magazine as a worker correspondent.

Having been fired, ‘Vatti’ went to Hamburg, where he got a residence ban because of his political activities. He was finally granted permit to take up residence in Altona, which at that time was independant from Hamburg. He stayed at the houses of friends and found a new job.

Erich became a member of the Kommunistische Partei Deutschlands (the Communist Party of Germany) and subsequently the party’s political leader of a Hamburg sub-district. He also became a member of the KJVD’s Wasserkante district as well as District Leader of the Rote Jungfront (Red Young-Front); the youth organisation of the Roter Frontkämpferbund (Alliance of Red Front-Fighters).

By 1929 Erich Hoffmann joined the editorial staff of the communist newspaper Hamburger Volkszeitung as an intern. Editor, Willi Bredel, was his teacher and mentor. In 1930, when Bredel was arrested for “conspiracy to literary high treason” Erich became full-time editor.

In total, ’Vatti’ was indicted 94 times by the Reichsgericht (Imperial Court of Justice). These included 28 indictments for high treason — two of which arose from newspaper articles about the anniversary of the October Revolution and the unemployed workers’ hunger march.

He was eventually sentenced to prison. In 1930, the Reichgericht sentenced Erich Hoffmann to 30 months of imprisonment in fortress Gollnow (Polish: Goleniów) in Pomerania, Poland.

His civil rights had never been revoked, however, and after 18 months of imprisonment, he was elected to the Hamburg parliament. Consequently, Erich received parliamentary immunity and was released.

He began his parliamentary journey by adamantly promoting a united front of the KPD and SPD in the fight against fascism.

Erich Hoffmann tried to raise public awareness about the so-called training centres that the Sturmabteilung (‘Stormtroopers’) had set up in disused factories. One of these was the Wittmoor, located north of Hamburg, which, in 1933, became one of the first “Wild” [1] concentration camps in the Hamburg area.

Early March 1933, Erich Hoffmann was arrested in Lübeck. Reportedly, the Nazis especially hated him because of his fearlessness. He was transferred to Hamburg where he was repeatedly and brutally interrogated. He was also forces to watch his friend Etkar Andre being tortured by the SS. Erich suffered a serious, sustained head injury because of torture. For all that, he remained faithful to his convictions.

Due to bureaucratic disputes, he was eventually released. It wasn’t long, however, before the authorities searched for him again. Erich fled to Copenhagen, Denmark and then to Moscow.

Once in Moscow, he was treated for his head injury and he gradually recovered his health.

At this point in time, the Spanish Civil War broke out. Wanting to fight fascism in Spain, he received tank driver training in the Soviet Union.

On Whit Monday 1937, Erich ‘Vatti’ Hoffmann went to Istanbul, where he boarded a Spanish Vessel bound for Valencia. In early June, he joined his company east of Madrid.

Early July 1937, near the town of San Lorenzo de El Escorial [2], he was severely wounded by a piece of shrapnel. After his recovery Erich was appointed Kriegskommissar (War Commissioner) and transferred to the Medical Centre of Murcia [3] to organise medical and food supplies to the front.

Early 1938 an emergency situation arose in Murcia; the fascists had reached the Mediterranean sea south of the Ebro delta. The hospital had to be evacuated. Erich Hoffmann was responsible for the evacuation of the wounded comrades and the medical facilities.

In February-March 1939, the Spanish Republic definitively broke down under the onslaught of the Spanish fascists and their supporters, Hitler’s Germany and Mussolini’s Italy.

From bad to worse

Erich was arrested 10 February 1939 in France and confined in Gurs internment camp. Only International Brigade combatants were interned in Gurs, which created an unparalleled solidarity among the prisoners.

Before his arrest in February 1939, in order to escape the Gestapo persecution, Erich Hoffmann got a false passport under the fake name Martin Anderson, born 2 July1900 in Ventspils, Latvia. He was now classified ‘Jewish’ because of his fabricated country of birth and forced to add “Israel” to his name. Preceding the occupation of France by the German Wehrmacht in June 1940, Hoffmann was transferred to Auschwitz May 1940.

Auschwitz consisted of three main camps and several sub-camps/satellite camps, some of which were labour camps. In these camps, the Nazis systematically and ruinously exploited the prisoners’ labour. Erich was transferred to the satellite camp Jawischowitz, where the prisoners worked in the coal mines.

As in all concentrations camps, in Auschwitz the political prisoners illegally organised. They tried to resist in any way possible; through mutual assistance, transfer of prisoner functions and sabotage.

Erich soon became part of this covert organisation. When he was injured in a work accident in the coal mine, he only survived thanks to the help from his friends and comrades. Prisoners who could no longer work, were generally shot immediately by the SS.

After the war, Erich ‘Vatti’ Hoffmann wrote in the Hamburger Volkszeitung about the following, particularly harrowing experience in Auschwitz:

“One day we could hardly believe our eyes! A group of 160 children aged 11 to 17 marched into the camp […] children of Hungarian Jews […]. Our only thought was: SAVING THE ENDANGERED CHILDREN!

I was assigned as camp elder of the children’s block; block 10. That was by no means a coincidence, but the result of conscious political prisoners’ purposeful work. […] To prevent their physical decline, we made use of every option available such as keeping them from working, organising sick leave for the weakest of them and regular and sufficient swimming […] providing extra food and special medical examinations by prisoner doctors, who were members of the resistance group […]”

Towards the end of the long-lost war and as the Red Army approached Auschwitz, the camp and sub-camps were evacuated. The SS transported or forced the prisoners to march westward on what became known as the ‘Death Marches’.

Erich Hoffmann arrived to Buchenwald with Transport No.18-82 together with the Hungarian children. Due to the solidarity of the prisoners, a majority of the children survived Auschwitz. Once in Buchenwald, the comrades were able to ensure the survival of most of them in the last three months of the war.

11 April 1945, the day of the self-liberation of Buchenwald, was also the day of liberation for Erich ‘Vatti’ Hoffmann and the 158 of 160 Hungarian children who survived Buchenwald. 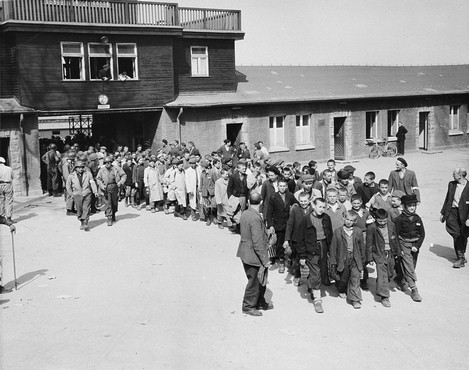 Erich Hoffmann, now using his real name, appears as no. 3 on a list of 65 Hamburg citizens, who were able to return to their bombed-out hometown in mid-May 1945.

After returning to Hamburg, Erich became chief editor of the Hamburger Volkszeitung from 3 April 1946 to 1950. From 1946 to 1953 he was a member of the KPD in the Hamburg Parliament.

Hoffmann appeared before the Hamburg District Court in 1947 and the Regional Courts in 1956 for “insults” and “attack against the constitutional order of the Federal Republic.” Both trials ended in acquittal and fines.

Throughout his writing, Erich has never once touched upon his personal ordeals; his injuries, his misery and fear, the mental and physical torture under the fascist regime from which he never recovered. 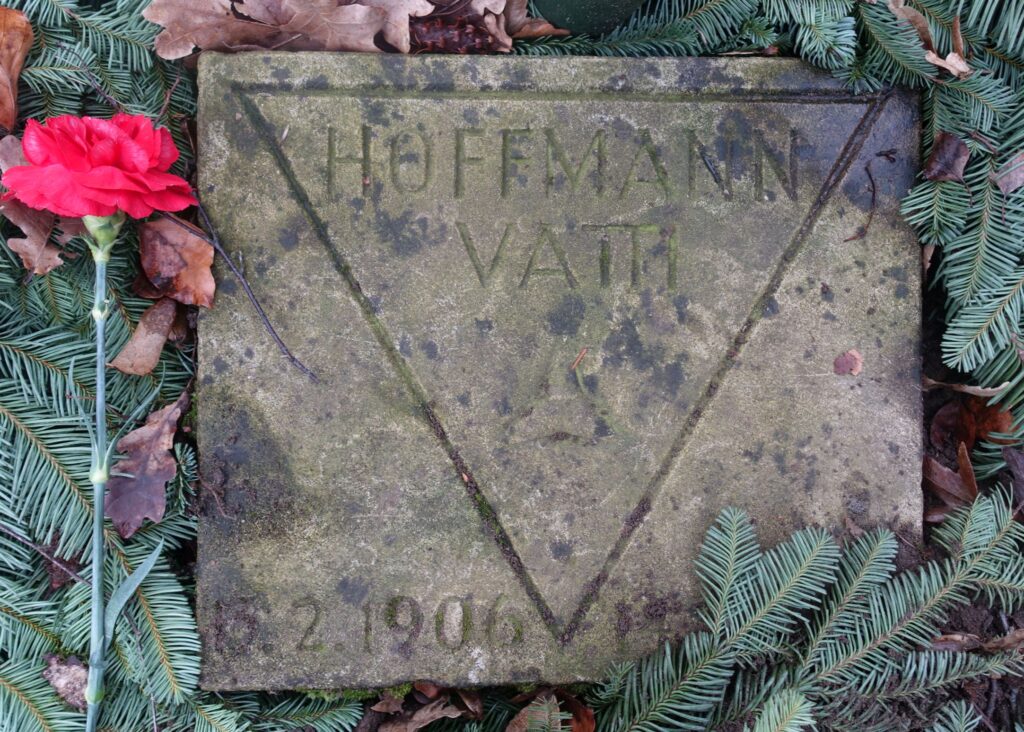 Erich ‘Vatti’ Hoffmann died after a long illness from a heart attack on 14 February 1959 at the age of 53.

He was buried at the Ohlsdorf Cemetery in Hamburg sharing his final resting place with his comrades in the Memorial grove for the Hamburg Resistance Fighters.

[1] The ‘Wild camps’ were the early concentration camps that sprang up like mushrooms after Hitler seized power January 1933. These camps were largely semi-autonomous; controlled by Nazi paramilitary groups or police forces.

[3] Murcia is a city in south-eastern Spain.