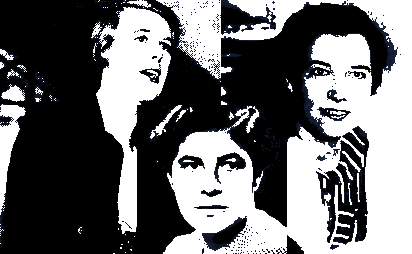 Five Danish women (perhaps more) each participated in their own way in the Spanish Civil War. Temperaments and efforts differed, but they each shared the will to provide the Republic with whatever assistance they could provide. The efforts of these women are underexposed. We will make an effort to correct this by telling you the little we know about them

The first of the five women is Charlotte (Lotte) Møller. She was actually German of birth. On the run from the German police, she came to Denmark when she was twenty-four years old. She was pro forma married to a Danish sailor, hence the name Møller. For some years, she worked for The International Seamen and Dockers Union (ISH), which was a department of Red Help and at the same time in Denmark’s Communist Party, DKP.

In 1937, she traveled to Spain to work in the International Brigade’s administration. By the end of 1938, she returned to Denmark, where she continued her work in DKP until she was arrested in May 1941 by the Danish Police and sentenced to 2 years’ imprisonment for communist activity.

She returned to Denmark in May 1945. A few years later, she married the German Max Spangenberg and moved to Berlin where she died 14, January 1974. 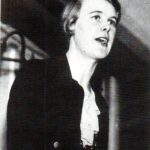 Elna Hjort-Lorenzen was a trained nurse and, as Lotte Møller, politically active within the communist movement where she met Arne Munch-Petersen and 28. December 1935, they were married at the City Hall of Copenhagen.

When Elna got involved in something, she was 100% committed. Shortly after the outbreak of the Spanish Civil War, at the first reports on Franco’s Air Force bombing of cities with mutilation and death for thousands of women and children, she felt compelled to react. She immediately threw herself into the relief work for the Spanish Republic. Eighth of June 1937, she travelled to Spain, commissioned by DKP to estimate the needs and the possibility to send a fully equipped Danish ambulance to Spain. Her trip to Spain became dramatic, not at all what she had expected and hoped for.

She reached Perpignan without any significant problems, but then the difficulties began. She was thought to be incapable of climbing the Pyrenees by foot – though she herself felt capable to do so. She was placed in a ship compartment in Beziers where she waited for 13 days before she could leave with a group of Americans. However, the ship was stopped in the open sea by a France warship and ordered back to Beziers. She had by now spent all her holidays, but she was determined to go to Spain no matter what the cost, including her work at the Rigshospitalet (the Kingdom Hospital I Copenhagen).

The Spain-volunteers network found a new route. She was to go by train to Port Bou, which she did without any difficulties. Finally, she was in Spain. Once in Port Bou, she asked for directions to the military commander to get her documents authorised, but she was told that he had a siesta. Waiting at the square outside the city hall, a swarm of bombers dipped over the city dropping their loads of bombs.

Now her nursing skills were needed. She rushed toward the bombed-out houses camera in hand and immediately took some photos for a future article. That was a mistake. She was arrested by a harbor watch and taken to the military commander. Once there, she tried to explain herself, but they didn’t believed her story. She was incarcerated for four months before she managed to get in touch with the Communist Party of Spain (PCE). The party intervened, and 14. November she was released.

At PCE’s office, they needed her language skills, as many Scandinavians came to Barcelona on their way home when wounded or called back home for new assignments.

Elna Hjort-Lorenzen possessed the will to accomplish her objective, but the circumstances would be different. 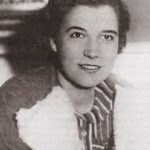 Ruth Berlau‘s approach to and participation in the Spanish Civil War was quite different from Elna’s. In the late summer of 1937, she and Bertolt Brecht traveled to Paris to attend “The International Writers’ Congress for the Defense of Culture” where Martin Andersen-Nexø from Denmark, Hemingway from the USA, Nordahl Grieg from Norway and many other writers were present. The congress began in Paris and continued in Madrid.

Brecht returned to Denmark, but asked Ruth to travel to Madrid, with the other participants, to collect the ‘material’ for the piece “Die Gewehre Der Frau Carrar” – which he was working on at that time – eyewitness accounts and other information about the situation in Spain. Ruth was accompanied by Russian author and journalist Mikhail Koltzow on his airflight to Madrid.

Her stay in Spain lasted for about four months, for the most part in Madrid, where, among other things, she met Egon Erwin Kirch, who introduced her to the circle of journalist colleagues. During this hectic period in Madrid, she met many celebrities, such as Ernst Busch, Bodo Uhse, Erich Weinert and Willi Bredel.

Together with Nordahl Grieg and a couple of other writers, she traveled to the front in order to experience with her own eyes how the situation really was. It did not become a long-standing front service for Ruth Berlau, partly because many men felt  uncomfortable with women in the front line, partly because Brecht was waiting for his material in Svendborg, Denmark.

Ruth brought back to Brecht the experiences from the front, Madrid and other places she had visited. He was not too enthusiastic about her accounts – she told him about amazing experiences, he wanted to know something about the political background of the civil war.

The play “Die Gewehre der Frau Carrar” was, however, the result of their joint efforts.

After a long and touching relationship with Brecht, Ruth Berlau died on 16. January 1974 and was buried at Doretheenstädtischer Friedhof in Berlin, where Bertolt Brecht himself is buried.

Elise Vilhelmine Thomsen worked for about a year in Spain delegated by the Danish department of the Friendship Society (Quakers) in the spring of 1937 to organise and manage a canteen and a children’s home/orphanage for homeless children in Barcelona. In support of her work, the Women’s National Council established a committee with departments across the country that collected clothes and raised money for the work. The money was transferred to a Quaker bank account in Copenhagen for the purchase in Denmark of milk, canned food, soap and salted cod. All the purchased goods as well as collected and repaired clothes were sent to the Quaker Centre in Barcelona.

There were four large milk canteens in Barcelona. Elise led one of them, from which milk was distributed to 3-4,000 children. As the amount of refugee in Barcelona grew explosively, Elise managed to set up a new canteen where, each morning, 200 children under the age of seven could get a meal of oatmeal with milk and sugar. Because of the collection by women groups in Denmark, she could soon extend breakfast to include 500 children under the age of ten.

In Manresa just outside Barcelona, an orphanage had been established for 90-100 children from the most war-affected areas. Their food and clothes were also paid by support groups in Denmark.

The children thrived in the orphanage and it was a daily pleasure for Elise Thomsen to go there either with different things that were needed or just to be together with the children. One day, she made a good deal with a farmer; he got dried cod and she got chickens. After that trade, the kids had hens running around and they could get eggs.

When Elise Thomsen returned home in 1938, the women’s groups continued to collect money and send them to the orphanage in Manresa. Elise held several lectures around the country to agitate for continued support for the collection of money and clothing.

The Swedish head of the hospital in Alcoi Dr. Nils Silfverskiöld mentions in a report that a female Danish doctor has offered to come to Alcoi. He also writes that the hospital is in contact with a Danish radiologist. In letters and reports from Alcoi, a Dane is sometimes mentioned, with no indication of a name. The only reference to a Danish name is in a report by the Norwegian doctor Pettersen from August 1937 who mentions “that Miss Kirketerp-Møller will travel from Alcoi to Copenhagen.” No further information is given about this person.

A small picture drawn by five people with very different convictions and approaches, but with a shared passion and willingness to change the world to a more beautiful and peaceful place for people to live.

Most of the women who participated in the Spanish Civil War worked behind the front, as nurses in the brigade’s administration or with humanitarian work involving children and young people, for instance. Some women participated directly on the front line, but they were isolated examples. Photograph Grete Taro was one of them. She was killed while working to perpetuate the cruelty of the war with the camera’s lens.

In fact, many women from different countries volunteered. You don’t hear much about them, even though their presence and efforts were just as necessary as the soldiers fighting on the front.