The Spanish Flag Is Handed Over to the DKP

This brief account of the Spanish flag returning from Spain to the Communist Party of Denmark, is the story of the penultimate stage of its journey. The account of the first stage is entitled Happy New Year 2019 — a Flag Is Returning Home

At the 1937-1938 New Year’s party in Idrætshuset in Copenhagen, the Spanish flag is handed over to the Communist Party of Denmark (DKP)

True to tradition, the Copenhagen district of the DKP has prepared a New Year’s party at the turn of the year 1937-1938. The date is 15 January 1938, and the venue is Idrætshuset (‘Sports House’) in Østerbro, Copenhagen. The party proves to be quite an attraction, and the atmosphere is elated—not least because of the participation of 14 returning Spanish Civil War fighters.

At precisely eight o’clock, Warny’s dance band gets the party started; the tunes of popular songs fill the room, and the party guests happily sing along. Following the welcoming remarks by chairman of DKP Copenhagen and Copenhagen City Council representative, Johannes Hansen [1], is a pompous entry march to the tunes of The Internationale; led by flag bearers proudly displaying the Spanish Republican flag, 14 young women enter, each carrying a bouquet. They are closely followed by the 14 returned Danish volunteers in the Spanish People’s Army headed by Lieutenant Ebbe Bøge Nielsen [2], who is carrying the flag to be transferred to the DKP. 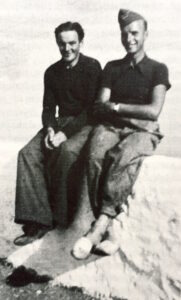 Captain Jørgen Nørup [3] gives a speech on behalf of the Danish volunteers and amongst great rejoicing Ebbe Bøge Nielsen hands over the flag to Johannes Hansen, who acknowledges with a speech. Another Danish volunteer, Fritz Møller [4], then shares the history of the flag.

Per Knutzon stirs enthusiasm among the guests reciting Nordahl Grieg’s beautiful and foresightful poem “Til Ungdommen” (‘For the Youth’) [5], which is perhaps best known in Denmark by the title “Kringsatt av Fiender” (‘Surrounded by Enemies’)—the first line of the poem.

Surrounded by enemies,
now is the time!
In this bloody storm
you must fight!
Perhaps you will fearfully ask,
unsheltered and exposed:
with what should I fight,
what weapon do I have?

The driving bands of the grenades
silently unwrap.
Stop their slaying path,
stop them with your strong spirit!
War is contempt for life.
Peace is to create.
Use all your strength:
Death shall lose!

Love and enrich with a dream
all things great and past,
Face the unknown,
wrest from it an answer.
Envisioned works of power
undiscovered stars —
create them with the daring brains
of spared life.

Man is noble
the earth is rich!
If there is suffering and hunger
betrayal is boundless.
Crush it! In the name of life
injustice shall fall.
Sunshine and bread and spirit
belongs to everyone.

Weapons shall feebly fall.
When we create
a life in dignity for all
we create peace.
He who is carrying
in his right hand
this precious and valuable gift,
cannot take up arms.

This is our promise
brother to brother:
we shall be good
to the human earth.
We shall cherish
the beauty, the warmth —
as if gently carrying a child
in our arms!

The Spanish flag at the Fuencarral Cemetery in Madrid, 7 November 2016

[1] Unfortunately, we have not been able to find an English reference source on Johannes Hansen. If you are unfamiliar with google translate, follow these steps to translate this Danish article into English: open a web browser and go to google translate. Select the two languages you need: Left window, select Danish, right window, select English. Copy this link: https://arbejderen.dk/artikel/2010-02-20/johannes-hansen-den-f-rste-kommunistiske-borgmester and paste it in the Danish window, press Enter. A link will now appear in the English window. Click the link (in blue) and voila!

[2] Ebbe Bøge Nielsen was a Spanish Civil war volunteer. He served on allied ships during the Second World War and was killed when the S/S Margit was torpedoed and sunk in the Norwegian Sea (part of the Arctic Sea) by a German submarine on 7 February 1944.

[3] Jørgen Nørup was a Spanish Civil War volunteer and a Second World War resistance fighter. He escaped during the Bombing of Shellhuset on 21 March 1945.

[4] Fritz Møller was a Spanish Civil War volunteer and a Second World War resistance fighter. He was captured by the Germans and sent to Neuengamme Concentration Camp. After narrowly surviving, he returned severely weakened to Denmark after the war.

[5] The poem was translated from Norwegian by Maria Busch, June 2020.